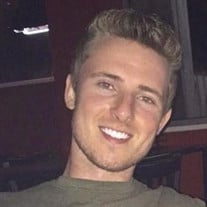 Alec Patrick Mabie, 27, of Chicago, IL passed away unexpectedly on Monday, March 7th, 2022. He was born on July 24th, 1994 in Janesville, WI, the son of Ami Mabie. Alec grew up in Clinton, WI, a small country town. Many of the fondest memories of Alec are of him surrounded by family and friends. Being an only child, he forever wanted his cousins and friends to stay at the house, needless to say, there were many sleepovers. These friendships continued throughout his life. His Junior year, he transferred to Rockford Christian High School where he developed many more lifelong friendships. Alec was a natural athlete in every sport, with the exception of golf, although he was even starting to conquer that. Basketball was his one true love, he enjoyed the challenge of the game and the comradery with his teammates. He played for multiple AAU teams in Rockford, Madison, Chicago, Indiana, and Iowa. He had multiple offers to play at D2 schools, and four official visits to D1 schools. He attended Quakerdale Prep Basketball Academy, which was followed by a scholarship to play at DMAC in Iowa, and then played for the University of Wisconsin, Whitewater where he graduated. Along with playing basketball, he also enjoyed sharing his love of the game by coaching at youth college basketball camps. After graduation, he landed his dream job teaching physical education at Brownell Elementary School, where he loved his students and coworkers. With this new job, a new exciting chapter in his life began, as he moved to Chicago. He fell in love with the city life and his new friends, who became like a second family to him. In his free time, he enjoyed trying new restaurants, time spent at The Play Pen, Lake Michigan on Johnnie B’s boat, working out and the weekend nightlife with friends. He also had a strong love for animals, especially dogs. Survivors include his mother, Ami Mabie of Clinton, WI; father Steven Gannon of Iowa; grandfather, Denis Mabie of Clinton, WI; aunts and uncles, Troy (Karen) Mabie of Queen Creek, AZ, Christian Mabie of Clinton, WI, Jacqueline (Greg) Jeffers of Beloit, WI, and Rachel (Brock) Nelson of Morris, IL; numerous cousins, multiple great aunts and uncles, and an endless number of friends who loved him. He was predeceased by his grandmother, Ruth Ann Mabie and uncle Patrick James Mabie. Visitation of remembrance for Alec will be from 1:00 PM to 4:00 PM on Saturday, March 19th, 2022 at the Daley Murphy Wisch & Associates Funeral Home and Crematorium, 2355 Cranston Road, Beloit, WI. A Funeral Service for Alec will begin immediately after the visitation. A memorial in Alec’s name will be established towards Youth Basketball and Mental Health Awareness specifically NAMI. Alec was a gentle, pure, soul, who truly loved his family and friends. He will never be replaced. We love you. Please share a memory, photo or condolences with the family on Alec’s obituary tribute wall.

Alec Patrick Mabie, 27, of Chicago, IL passed away unexpectedly on Monday, March 7th, 2022. He was born on July 24th, 1994 in Janesville, WI, the son of Ami Mabie. Alec grew up in Clinton, WI, a small country town. Many of the fondest memories... View Obituary & Service Information

The family of Alec Patrick Mabie created this Life Tributes page to make it easy to share your memories.

Send flowers to the Mabie family.