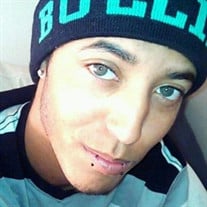 Andrew Steven Schultz was born on March 8, 1993 at Rockford Memorial Hospital, in Rockford, Illinois to Trina Schultz-Duffy. From a very early age, Andy had the gift of captivating everyone he met. His smile and personality were contagious. To quote one of his dear friends, "he never met a stranger". Those qualities only grew throughout the years. Andrew did many things in his short life. He found the greatest enjoyment in careers that involved people. He spent most of his adult life in the trades of restaurant and hospitality and even became involved with entertainment events for big name bands. He was always searching new skills and opportunities and truly excelled at anything he put his mind to. He was a modern-day voyager and would go where the wind blows. He traveled and lived from the west to east coast at one time or another, but always called the Midwest home. Andy went to many places and touched so many lives. He only ever wanted to see those around him happy. He would offer a stranger the shirt off his back if he thought that gesture would better them. His love and encouragement and support were of great impact to others and will continue on through each and every one of them. Andy was one to take chances and opportunities and was utterly fearless. In his past time, he enjoyed rollerblading, skateboarding, and could do such incredible tricks on a 2 wheeled scooter that were amazing to watch. He also loved to dance. Watching him was as fluid as liquid in a bottle. And he took great personal enjoyment trying to depart that knowledge and those skills to others. Andy also had a great love for music. Not only did he always have a new artist or song to share, he also found great therapy in writing his own music and could improv a rap at a moment’s notice. Andrew’s family are the very center of his heart and soul. The closest people in his life are his 3 younger sisters and his grandma. He would never allow his sisters to end a visit without a hug and a photograph of that moment no matter how much they protested. He was very protective over them and bragged on them all the time. His grandma was like his phantom limb. The two of them were like peanut butter and jelly and both looked to one another for support in every form. Andrew's biggest accomplishment in his life is his son Jaxon. When he found out Jaxon was on the way, he beamed with excitement. Nothing else ever made him so proud. Every chance he got he was showing off pictures. His eyes never sparkled as much as they did whenever he spoke of Jaxon. The Lord brought Andrew home on Saturday, January 29, 2022 at 11:43 a.m., he was 28 years young. Andy was surrounded by his family at UW Hospital in Madison, Wisconsin, and accompanied by his family for his Honor Walk. He was preceded in death by his grandparents, Robert and Shelly Schultz (Shaw). Andy is survived by his mother, Trina Schultz-Duffy (Sean Duffy), sisters Morgan, Peiton, and Luca Greenfield, son Jaxon (Megan Webb-Dwyer), uncle Robert Schultz and his three children, Dillon, Cassidy and Isabelle (cousins), and aunt Cherie Schultz. And while there are too many extended family members to name, he also had many life-long, close friends that he called his family. A celebration of life will be held by family at a later date with information to be released by friends and family.

Andrew Steven Schultz was born on March 8, 1993 at Rockford Memorial Hospital, in Rockford, Illinois to Trina Schultz-Duffy. From a very early age, Andy had the gift of captivating everyone he met. His smile and personality were contagious.... View Obituary & Service Information

The family of Andrew Steven Schultz created this Life Tributes page to make it easy to share your memories.

Andrew Steven Schultz was born on March 8, 1993 at Rockford Memorial...

Send flowers to the Schultz family.