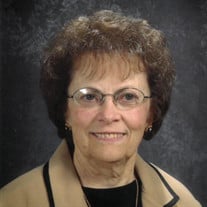 Arlene Elizabeth McMorran (Sukowatey), 78, of Beloit, WI, passed away on Tuesday, November 17, 2020 in her home. She was born February 26, 1942 in Madison, WI, the daughter of Arthur and Genevieve (Hensen) Sukowatey. The oldest of seven children, Arlene grew up on her family’s apple orchard in Waunakee, WI. At age 14, she left home to attend St. Mary’s Springs Academy in Fond du Lac, WI., graduating in 1960. While attending Marion College, Arlene’s Catholic faith led her to join the Congregation of the Sisters of St. Agnes where she professed her vows as a religious sister in 1962. Taking the name Sister Rosine, she achieved her childhood goal of becoming a teacher. She taught students in Catholic Schools in Pennsylvania, Illinois, and Mississippi until 1973. Feeling God calling her down a different path, Arlene left religious life, but remained close to her vocation as a teacher as she worked in Catholic Schools and hospitals in Phoenix, AZ. It is there where she met Frank McMorran. They were married on July 26, 1975 at St. John’s Church, Waunakee, WI. After the birth of her daughter and son, Arlene and her family moved home to Wisconsin where she completed her Master’s degree in Educational Administration at the University of Wisconsin Madison in 1984. Arlene became the principal of Our Lady of the Assumption Catholic School (OLA) in Beloit, WI in January of 1985. This is where she found her “forever home”! Arlene was the principal at OLA for 27 years. She loved OLA, her staff and students greatly. Helping students grow academically and spiritually was a true passion for Arlene to which she dedicated herself fully. The school and parish community were like family to her, and it was a joy for Arlene to work and serve among them. After retiring from OLA in 2011, she continued to serve the Beloit Community as she became the part-time secretary for St. Stephen’s parish in Clinton, WI. She was the co-chair for the OLA Alumni Committee and helped run the Alumni Committee Facebook page. She served as the President of the local Zonta Club where she became passionate about bringing awareness to issues such as domestic violence and human trafficking. She also worked with Dismas, the Catholic group that visits those incarcerated in Rock County Jail. Arlene adored her family and especially delighted in spending time with her two grandchildren. She felt truly blessed to be involved in the lives of so many dear friends. Anyone who met Arlene, even briefly, could see the authentic joy and giving spirit with which she lived her whole life. The family wishes to thank Beloit Regional Hospice and dearest friends who assisted with her care. Survivors include her daughter, Jean-Marie (Alex) Armaos; grandchildren, Theodore and Genevieve; siblings, Roger (Bonnie) Sukowatey, Dan (Ruth) Hiller, Ronald (Susan) Cone, Ray (Bonnie) McAllister and Gary (Cindy) Sukowatey. She was predeceased by her parents; husband, Frank, son, Sean; and brother, Stanley. In lieu of flowers, please consider making a donation to the OLA Tuition Assistance Fund in her name. Funeral Mass of Christian Burial for Arlene will be at 11:00 a.m. Tuesday, November 24, 2020 in Our Lady of the Assumption Catholic Church, 2222 Shopiere Road, Beloit WI, with Fr. Michael Resop officiating. Burial will be in St. John’s Cemetery, Waunakee, WI. Visitation of remembrance will be from 4 to 6 p.m. Monday, November 23, 2020 in Our Lady of the Assumption Catholic Church. Visitation will also be from 10:00 a.m. until 10:45 a.m. Tuesday in the church.

Arlene Elizabeth McMorran (Sukowatey), 78, of Beloit, WI, passed away on Tuesday, November 17, 2020 in her home. She was born February 26, 1942 in Madison, WI, the daughter of Arthur and Genevieve (Hensen) Sukowatey. The oldest of seven children,... View Obituary & Service Information

The family of Arlene E. McMorran created this Life Tributes page to make it easy to share your memories.

Send flowers to the McMorran family.