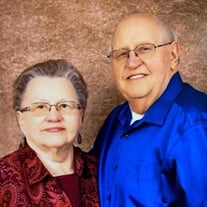 Barbara Lee Nitz, 86, of Beloit, WI, passed away on Tuesday, January 4, 2022 at Beloit Memorial Hospital and Harold E. Nitz, 85, passed away on Monday, January 10, 2022 at St. Mary’s Hospital in Janesville. Barbara was born on November 5, 1935 in Beloit, WI, the daughter of Theodore and Clara (McDonald) Beischel. Barbara was a graduate of Beloit Memorial High School. Harold was born on April 16, 1936 in Beloit, WI, the son of William and Marie (Gifford) Nitz. He was a Veteran of the United States Army. Harold and Barbara were married on January 24, 1959 in Beloit. Barbara was formerly employed by Brown Swiss Association. She was a member of the Marian Guild, the W.W.I. Bowling Association and the Beloit Turner Booster Club. Barbara was on the planning committee for the class of ’54 reunion. She enjoyed taking bus trips to the casino with her friends. Harold was employed by General Motors for 41 years. He enjoyed being outside, tending to his garden and woodworking. Barbara and Harold were members of St. Jude Catholic Church. They lived an active healthy life style. They enjoyed going on walks, traveling and going on many day trips. They enjoyed watching sports, especially the Green Bay Packers and Wisconsin Badgers. Survivors include their son, Steve (Corrine) Nitz of Beloit, WI; daughter, Cheryl Nitz of Denver, CO; grandson, Devyn (Becca Desrochers) Hernandez of CO; great granddaughter, Karina; Harold’s sister, Mary Haas; and many nieces and nephews. They were predeceased by their parents; Harold’s stepmother, Dorothy; Harold’s brothers, William and Don; and Harold’s stepsister, Henrietta McKee. A Private Family Service was held. A Celebration of Life for Barbara and Harold will be held at a later date. Daley Murphy Wisch & Associates Funeral Home and Crematorium, 2355 Cranston Rd., Beloit, WI, assisted the family with arrangements.

The family of Barbara and Harold Nitz created this Life Tributes page to make it easy to share your memories.

Send flowers to the Nitz family.