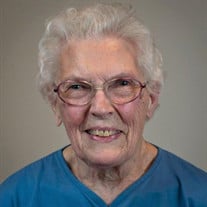 Barbara Jean Finnegan 96, of Beloit, WI, was peacefully called home on February 6, 2022 at Azura Memory Care, in Beloit. She was born Barbara Jean Luce on January 24, 1926, in Beloit, the eldest daughter of Harry and Marie (Joy) Luce. Barbara was a 1943 graduate of Beloit High School. Upon graduation from high school, Barbara immediately joined the WWII United States civilian war effort as a ‘Rosie-the-Riveter’, working first at an airplane radio operator school in 1943 and later that fall joining the United States Army Signal Corps by moving to Arlington, VA and working as an Axis Powers code-breaker at the United States Army Military Intelligence Division of the United States War Department (now known as the Pentagon) for the balance of 1943 and in 1944. After the untimely death of a classmate in 1944, she moved back to Beloit for his funeral and was then employed at Jorgensen Engineering in Beloit as an aircraft cabler for military aircraft production, in 1944-1945. One day, she was crossing the Portland Avenue Bridge with her late cousin Joan Moody (also a ‘Rosie-the-Riveter’ at Fairbanks Morse) when they passed by a couple of handsome sailors walking the other direction. As she peeked back over her shoulder, one of those sailors was doing the same and she later learned he was Cyril Finnegan, of Litchfield, MN, in Beloit for a month-long Naval diesel engine training school at Fairbanks Morse. The romance was instant and on June 15, 1946 after Cy’s discharge from the Navy, the two lovebirds were married at the Church of the Blessed Sacrament in Portland, OR. Since WWII was finally over, they eventually settled back in Beloit and raised a family of eight children (seven boys and one girl). Barbara was a wonderful, loving mother and homemaker while Cy worked at Fairbanks Morse and was a locomotive test mechanic. Eventually, the two became self-employed with Finnegan Oil Company, primarily servicing rural farm accounts and running a small group of service stations, with Barbara doing the accounting while raising all those children. In the later 1960’s, the four eldest sons all enlisted in the military during the Vietnam War (Tom, Jerry and Denny all in the Navy, while Tim enlisted in the Army). Tim’s wife Cynthia was an Army Major and a combat nurse in Vietnam, eventually succumbing to a decades prolonged battle with MS in 2003 and is interred at Arlington National Cemetery, something Barbara and the entire family were immensely proud of. As the children became adults, Barbara and Cy closed out the fuel oil business and Cy went to work at Burnham Ford in Beloit and later started the Finnegans’ RV business; while Barbara began a career at the Kohl’s Food store in Beloit in the late 1960’s. She worked there until the store was sold to A&P Foods and retired permanently in the late 1980’s. Barbara and Cy were charter members of Our Lady of the Assumption Catholic church in Beloit, since 1955. After Cy’s passing in January of 2000, Barbara spent her later years enjoying the feeding of her ‘kids’ in her back yard (numerous whitetail deer, squirrels, birds, etc.), until a neighbor turned her in to the DNR in 2014. This was a shock that she never completely got over. She also cherished traveling and all visits from her ever growing family of 15-grandchildren and 18-great grandchildren. Barbara lived by herself until she took a fall in her home in early 2015, which, when coupled with the onset of dementia, eventually led to her permanent residence in assisted living facilities, culminating with her passing at Azura Memory Care in Beloit, less than two weeks after her 96th birthday. Survivors include her children: Thomas (Christine) Finnegan of Monterey, CA; Jerry (Alicia) Finnegan of Boise, ID; Dennis (Noris) Finnegan of Beloit; Timothy Finnegan of Crofton, MD; Carol (Roy) Pisetsky of Sonoma County, CA; Mark (Darlene) Finnegan of Beloit; John (Kimberly) Finnegan of Beloit; brother James (Judith) Luce of Weston, WI; sister Janet (Nathan) Courtwright of Marshfield, MO; sister in-law Mary (Melvin) Flicek of Austin, MN; sister-in-law Cindy (Maurice) Waldee of Rollingstone, MN. Grandchildren: Jason (Victoria) Finnegan of Temecula, CA; Lisa (Jimmy) Ford of Northlake, TX; Michele (Shane) Perez of Elko, NV; Julie (Jason) Nilsson of Roy, UT; Brian (Holly Abbott) of Meridian, ID; Daniel Finnegan of Ft Lauderdale, FL; Shawn Finnegan of Madison, WI; Jennifer (Jami) Edmonds-Finnegan of Beloit; Damien Pisetsky of Sonoma County, CA; Cagney (Meghan) Pisetsky of Sonoma County, CA; Justyn Finnegan of Beloit; Krystina (Nataneal) Schumer of Beloit; Zachery (Noelle Linden) Finnegan of Appleton, WI; Andrew Finnegan of Beloit; Abbygail Finnegan of Beloit; 18- great-grandchildren; very special nephew Terrance (Ann) Flicek of Beloit; very special cousin Lynette (Sam) Krueger of Beloit; very special friend and like another daughter, Theresa (Jeff) Cioni of Beloit; plus dozens of nieces and nephews. Barbara was predeceased by her husband Cyril; her parents; her son Patrick; her brother in-law Jerome; sister in-law Susan; daughter in-law Cynthia; daughter in-law Betty and infant grandchild, Kelly. A Visitation of Remembrance will be from 11:00 a.m. until 1:30 p.m. on Sunday, February 13, 2022 in the Daley Murphey Wisch & Associates Funeral Home and Crematorium, 2355 Cranston Rd., Beloit, WI. A Funeral Mass of Christian Burial for Barbara will be held at 2:00 p.m. on Sunday, February 13, 2022 in the Our Lady of the Assumption Catholic Church, 2222 Shopiere Rd., Beloit, WI, with Father Michael Resop officiating. A private family burial will be held in Mt. Thabor Cemetery, Beloit, WI. The Finnegan family wishes to extend a heartfelt ‘THANK YOU’ to the ‘family’ at Azura Memory Care of Beloit and the staff of ProMedica Hospice of Rockford for their incredible care and compassion for Barbara. Donations in Barbara’s name may be made to Nana’s Team at the Walk to End Alzheimer’s of Rock County; or to Our Lady of the Assumption Church, Beloit.

The family of Barbara J. Finnegan created this Life Tributes page to make it easy to share your memories.

Send flowers to the Finnegan family.