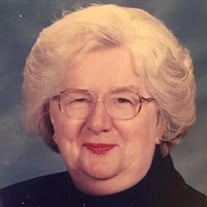 Our Mother, Beatrice L. (Reimer) Johnson, 87, was a lifelong residence of the Beloit, Wisconsin area. She was always proud to be called, “One of the Reimer Girls.” Our loving mother, Beatrice, was reunited with her loving husband, Richard I. Johnson, on February 25, 2022. Beatrice was born on January 12, 1935, in Beloit, Wisconsin, the daughter of Clarence and Clara (Moe) Reimer. Beatrice attended Powers Grade School and was a 1953 graduate of Hononegah High School, in Roscoe, Illinois. She later attended the University of Wisconsin Rock County and Blackhawk Technical College. Beatrice had several long-term jobs; she felt her last job was her most meaningful. She worked for more than 20 years for the Beloit School System. The majority of this time was as a Teacher’s Aide for Wright Elementary School. Beatrice’s faith was her most important and all encompassing character trait. Bea was a lifelong member of Our Savior’s Lutheran Church of Beloit, Wisconsin. Bea was part of Rachel’s Women Circle, for more than 50 years. This Circle is connected to the church. Bea served on many committees for both the church and the city. She worked up until about 3 years ago in various volunteer capacities. She wanted to remain useful and helpful, so she continued to help her Circle cut fabric pieces that others would sew into quilts. She also helped deliver Meals on Wheels in Beloit, Wisconsin. Through the years Beatrice looked forward to spending time with her family. Most of her family met once a week. Originally, it was Sunday afternoon and potluck supper, then it became Dominoes and Dessert on Friday’s nights and for quite a few years now, it has been Saturday morning for Breakfast. In her younger years Bea enjoyed camping with her family. Countless times, several of the families, camped all together. There are many happy memories of riding bikes on state trails, and a few times of riding horses on private trails. We camped almost every weekend, from Memorial Day weekend to Labor Day weekend. Some of the things we did were boating, canoeing, inner tubing, swimming, catching, cooking and eating tons of crayfish and various fillets of fresh caught fish. I can almost smell the smoke of a campfire. There was always plenty of great food to eat and share. There was also snowmobiling on some of the state trails and/or frozen creeks and rivers in the winter. Survivors include her children, Raymond J. (Jane) Johnson, Richard P. (Stephanie) Johnson, Helen, Nancy, and Robert M. Johnson; grandchildren, Megan Johnson, Jared Johnson, Shayne Jackson, Scott Hasner, Matthew Johnson and Claire Johnson; honorary granddaughter, Stephanie Ingram; great-grandchildren, Didrik Honey, Trinity Johnson and Hayden Johnson; siblings, Kay (Frank) Bullard and Linda (William) Knipp; brothers and sisters-in-law, Bernard (Ruth) Rosander, Judy (Phil) Reimer, Clarice “Claire” (Dennis “Den”) Jensen and Rev. Sonja Johnson. Beatrice was predeceased by her husband; parents; siblings, Betty (Melvin) Katterhenry, Carol (Harold) Mason, Mary Ann (Jack) Holmes, Ruth Rosander, Lee/Joe Reimer and Phil Reimer; brother-in-law, Raymond M. Johnson; two siblings that died in infancy, David Reimer, five weeks old, 1930 and Arlene Mae Reimer, six weeks old, April, 1932; niece, Jennifer Holmes; and nephew, David Bullard. Beatrice passed away peacefully at home. We are grateful that she was able to quietly slip away. A Memorial Service for Beatrice will be held at 10:30 a.m. on Saturday, May 7, 2022 in the Daley Murphy Wisch & Associates Funeral Home and Crematorium, 2355 Cranston Rd., Beloit, WI, with Pastor Tony Dusso officiating. Beatrice and Richard will be laid side by side at Floral Lawn Cemetery. Visitation of Remembrance will be held from 9:30 a.m. until the time of service Saturday in the funeral home.

Our Mother, Beatrice L. (Reimer) Johnson, 87, was a lifelong residence of the Beloit, Wisconsin area. She was always proud to be called, &#8220;One of the Reimer Girls.&#8221; Our loving mother, Beatrice, was reunited with her loving husband,... View Obituary & Service Information

The family of Beatrice Johnson created this Life Tributes page to make it easy to share your memories.

Send flowers to the Johnson family.