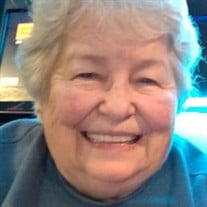 Bernice “Bee” Sympson, 79, of Afton, WI, passed away on Saturday, April 16, 2022 in her home. Bee was born on June 18, 1942 in La Crosse, WI, the daughter of Bernard and Doris (Piepenhagen) Kroll. She was a 1960 Beloit Memorial High School graduate. Bee married Robert Bakke and together they had three children. She later married Junior Lee “JR” Sympson on July 19, 1996 in Janesville, WI. He predeceased her on December 22, 2014. Bee was formerly employed by Beloit Corporation. She enjoyed dancing at Wigwam, bowling, camping and quilting. Bee and JR often went horse back riding together. In 1999, Bee and JR loaded up three cows, three heifers, three calves, one bull, one horse and a dog to “retire” in Summersville, MO on an 80-acre farm. There they raised beef cattle until 2008, when they moved to Bucyrus, MO. In 2012, they moved back to Wisconsin. Survivors include her children, William (Colleen) Bakke of Estill Springs, TN, Susan Bakke of Brodhead, WI, John (Patty) Bakke of Waukesha, WI and Jimmy (Lisa) Sympson of Beloit, WI; grandchildren, Shaina (Brandon) Perry, Jarrod (Julianne) Bakke, Adria (Jarrett) Branch, Kati (Cassandra) Sympson and Seth Pautsch; numerous great grandchildren; and brother, Boyd Kroll of Black River Falls, WI. Bee was predeceased by her parents and sister, Barbara Gilbertson. A Memorial Service for Bee will be held at 2:00 p.m. on Sunday, May 1, 2022 in the Daley Murphy Wisch & Associates Funeral Home and Crematorium, 2355 Cranston Rd., Beloit, WI with Rev. Gene Van Galder officiating. Visitation of Remembrance will be held from 12:00 p.m. until the time of service Sunday in the funeral home.

The family of Bernice Sympson created this Life Tributes page to make it easy to share your memories.

Send flowers to the Sympson family.