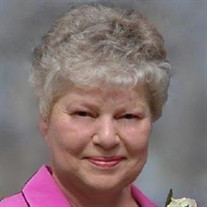 Betty Lou Drinkwater, 82, of Beloit, WI, passed away peacefully on Monday, January 4, 2021 in her home after a long illness. She was born on February 3, 1938 in Beloit, WI, the daughter of Raymond and Marita (Hentsch) Shultz. Betty married the love of her life, John Drinkwater on June 30, 1962 in Poplar Grove, IL. He predeceased her on February 17, 2010. Betty was employed by Adams Korn Kurls in Beloit from 1965 until 1974. She worked at OMC in Beloit from 1977 until her retirement in 1996. Betty was a member of the First Lutheran Church in Janesville, WI. She was also a member of the Elvis Presley Fan Club. In 1967, Betty and John bought their country dream home in Janesville. Over the years they worked as a team spending many days landscaping their yard. It was a labor of love for them. Betty referred to their home as “A Little Piece of Heaven.” Betty had many interests which included birdwatching, gardening, gambling, crafting, traveling, playing the accordion, playing cards, and pool with many family and friends. She enjoyed sending and receiving letters throughout the year. Betty loved animals and was known to feed stray cats that showed up at her door. She adopted one of them, Kelly, and were companions for 15 years. She was a caring and loving person who was always taking care of others first and enjoyed spending time with family and friends. She will be missed by all those she touched. Betty received a card from a grandchild that describes her well. Grandma is good, smart, huggable, fun to talk to, kind-hearted, admired and appreciated. Survivors include her children that will greatly miss her, Mike (Margaret) Drinkwater of Janesville, WI, Betty Jo (Roger) Ebbert of Fort Atkinson, WI, and Deborah Cronin of Janesville, WI; grandchildren, Timothy (Amanda) Drinkwater, Daniel Drinkwater, Jonathan Schaefer, Matthew (Trixxy) Martinez, Catrina (John) Kraus, Theresa (Doug) Hearn, Cynthia (Andrew) Cardoni, Angela (Jason) Nehls, Peter (Misy) Cronin, and Nicholas (Rachel) Cronin; great grandchildren, Sawyer D., Laurel, Kora, William, Henry, Elysia, Curtis, Mariah, Miklo, Matthew Jr., Tyler, Karley, Kaylee, Victoria, Caiden, Aviana, Alivia, Sawyer C., and Lexi; great-great- grandchildren, Mikayla, Elliana, Yahzlyn, and Jaxson; sister, Shirley Ostenson; and dearest friend, Halina Grabarek. She was predeceased by her parents, Raymond and Marita Shultz; husband, John Drinkwater; sister, Evelyn Hayden; brothers, Larry Shultz, Richard Shultz, and Robert Shultz; great grandson, Christopher Hodge. The family would like to give a special thank you to Agrace Hospice Care, Agrace Age at Home, and the First Lutheran Church. Private family services will be held. Burial will be in East Lawn Cemetery. A celebration of life will be held at a later date. Daley Murphy Wisch & Associates Funeral Home and Crematorium, 2355 Cranston Rd., Beloit, WI, assisted the family with arrangements. In lieu of flowers, memorial donations may be made to the Humane Society of Southern Wisconsin.

Betty Lou Drinkwater, 82, of Beloit, WI, passed away peacefully on Monday, January 4, 2021 in her home after a long illness. She was born on February 3, 1938 in Beloit, WI, the daughter of Raymond and Marita (Hentsch) Shultz. Betty married the... View Obituary & Service Information

The family of Betty Lou Drinkwater created this Life Tributes page to make it easy to share your memories.

Send flowers to the Drinkwater family.