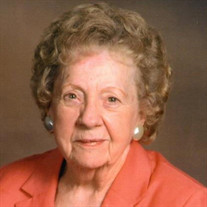 Betty June (Thorson) Lampher, age 92, of South Beloit, IL, passed away on Monday, August 16, 2021. She was born on August 10, 1929 at home in Rockton, IL to the late Hazel and Louis Thorson. Betty graduated from South Beloit High School in 1947. She took further studies at Beloit Vocational School. She also completed several American Institute of Banking Courses at Blackhawk Technical School. She married Harold Lampher at Our Saviors Lutheran Church on September 19, 1948 in Beloit, WI. Betty was a life-long baptized and confirmed member of Faith Lutheran Church in South Beloit, IL. She attended Bible Study for many years, taught Sunday School for six years and served on the church council for six years. Betty also served on various church committees at Faith Lutheran Church, South Beloit, IL. She was a past resident of the Beloit Credit Women’s Club and was elected “Credit Women of the year” in 1981. Betty was a member of “Professional Secretaries Organization” and was named “Secretary of the year” in 1988. She also served on the South Beloit Tourism Committee. Betty was a member of “Gold Star Sisters” in the South Beloit American Legion Post #288, since her brother, Donald was killed in the United States Marine Corp. in World War II. Betty cherished spending time with her husband, Harold, family and many friends hosting holiday parties and get togethers, boating on their pontoon, walking and reading. She enjoyed going on trips with her husband throughout the Unites States, also to Canada, Mexico and Hawaii. Betty and her husband, Harold celebrated their 60th wedding anniversary on September 19, 2008. Betty began her banking career in 1952 at the Beloit State Bank as a teller and eventually worked as Executive Secretary to the President of M&I Bank. She was employed for 38 years in the banking business and retired in 1991. She dearly loved her family and had many, many friends. Betty was loved by her family and will be missed by her two children, Gary (Cheryl) and Steven (Renee); two grandchildren, Beth Ann and Philip (Julie); two great grandchildren, Alex and Jackson; step-grandchildren, Andrew (Taylor), Jessie (Spencer) and Cassie (Jason); step great-grandchildren, Talon, Layla, Cooper and Reed. Betty is further survived by her brother, William (Elona) Thorson of Beloit, WI; sister-in-law, Shirley (Marcy) Thorson of South Beloit, IL; brothers-in-law, Tom Williams of Dallas, TX and Frank (Bernice) Mellen of Houston, TX; and many nieces and nephews. Betty was preceded in death by her loving husband, Harold on August 20, 2009; three brothers, Donald, David and Richard; brother-in-law, Dick Nielsen; four sisters, Dorothy, Barbara, Delores and Nancy. In lieu of flowers, the family requests memorials in her name may be made to the Faith Lutheran Church or to the family. A Funeral Service for Betty will be held at 2:00 p.m. on Saturday, August 21, 2021 in the Faith Lutheran Church, 1305 Blackhawk Blvd., South Beloit, IL with Pastor Rick Meier officiating. Burial will be in Floral Lawn Cemetery. Visitation of Remembrance will be from 1:00 p.m. until the time of service on Saturday in the church. Daley Murphy Wisch & Associates Funeral Home and Crematorium, 2355 Cranston Rd., Beloit, WI assisted the family with arrangements.

Betty June (Thorson) Lampher, age 92, of South Beloit, IL, passed away on Monday, August 16, 2021. She was born on August 10, 1929 at home in Rockton, IL to the late Hazel and Louis Thorson. Betty graduated from South Beloit High School in... View Obituary & Service Information

The family of Betty June (Thorson) Lampher created this Life Tributes page to make it easy to share your memories.