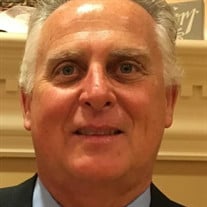 Carl R. Disrud Jr., 61, of Beloit, WI, passed away on Wednesday, April 20, 2022 at UW Hospital Madison of injuries sustained from a motorcycle accident. He was born on December 24, 1960 in Monroe, WI, the son of Carl Sr. and Judith (Smith)... View Obituary & Service Information

The family of Carl R. Disrud Jr. created this Life Tributes page to make it easy to share your memories.

Send flowers to the Disrud family.