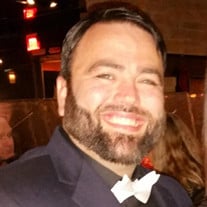 Chad Steven Burner, 46 years young, of Beloit, WI, passed away in the early morning hours on Saturday, September 18, 2021 of a heart attack in Nashville, TN. Chad lived and attended schools in the Beloit area, including Turner and Beloit Catholic High School. He currently worked at Birdseye Foods as a manager of operations and previously at Simmons, Serta, Seneca, and Bremner/Treehouse where he met some wonderful mentors and became a mentor himself. He displayed a wonderful knack for solving problems and was always trying to find ways to improve. Chad truly lived his life to the fullest everyday through simple pleasures; golfing, camping, and traveling were among his favorites. He loved spending time with his wife, family and friends doing anything that would make a great memory and story. Chad had the uncanny ability to reach people in a deep and positive way and the lives he touched can attest to that truth. His daughters, Morgan (Robert Bennie) and Jana (Ethan Timm) are heartbroken with his passing but are comforted to know that he lovingly and respectfully accepted the proposals from both men in their lives. He was proud of them both for all of their accomplishments thus far and was their biggest cheerleader for their future dreams. The foundation he laid out for them is strong and that strength is what each of us will hold onto going forward. He is survived by his wife and soulmate of 25 years, Jennifer; parents, Lesley (Michael) Justus and Steve (Debbie) Burner; grandmothers, Margaret Elliot and Katie Burner; half siblings, Tiffany (Jason) Schultz, Adam (Medina) Burner; step siblings, Jesse (Katie) Justus and Faith Justus; a tribe of aunts, uncles, cousins, nieces and nephews; and the greatest clan of friends anyone could ask for - all of whom already miss him terribly. Chad was predeceased by his grandfathers, William Elliot and Culver Burner. On Sunday, October 10, 2021 from 1:00 p.m. to 5:00 p.m. family, friends, and others whose lives Chad touched are invited to the Afton Town Hall, 5102 S County Rd D, Afton WI to reminisce, grieve, support one another and, of course, just chat.

Chad Steven Burner, 46 years young, of Beloit, WI, passed away in the early morning hours on Saturday, September 18, 2021 of a heart attack in Nashville, TN. Chad lived and attended schools in the Beloit area, including Turner and Beloit Catholic... View Obituary & Service Information

The family of Chad S. Burner created this Life Tributes page to make it easy to share your memories.

Send flowers to the Burner family.