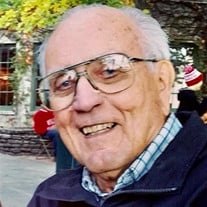 Charles Mook, Jr, 93, of Beloit, WI, died peacefully Tuesday, December 28, 2021, in Gosnell House in Scarborough, ME. He was born February 1, 1928, in Gay Mills, WI, the son of Charles Mook, Sr. and Katie (Drake) Mook. Charles was a 1946 graduate of South Beloit High School. He married Patricia E. Healy on October 10, 1959. Charles and Patricia built a home in Beloit, WI moving in January 1964 and lived there for 56 years. He spent the last two years living in Maine with his daughter and her family. Survivors include three children, Gregory (Maureen) Mook of Minneapolis, MN, Dianna (Kevin) Kruse of Freeport, ME, and Bradley (Yen) Mook of Hanoi, Vietnam; four grandchildren, Sophia Kruse of Freeport, ME, Charlotte Mook and Christopher Mook both of Minneapolis, MN, Kaiden Mook of Hanoi, Vietnam. As a young boy growing up on a farm in Southwestern Wisconsin, he enjoyed picking bushels of apples in the nearby apple orchards. He would move to South Beloit, WI for his high school years and graduated from South Beloit High School in 1946. Charles was a multi-sport athlete, enjoying basketball, football, and baseball. One of his proudest moments was being awarded the honor of an Eagle Scout. Following high school, he enlisted in the Army and was stationed in Manila, Philippines during WWII as an Instrument Surveyor. He was discharged in Seattle, WA with a WWII Victory Medal. After the war, he began a career with Wisconsin Power and Light, holding multiple positions and retiring after 38 years as a supervisor in 1986. During his career, he never took a sick day. He enjoyed spending time with his family, traveling on vacation every year to Wild Rice Lake in Manitowish Waters, WI for the summer and Destin, FL for the winter. During retirement, he would travel to visit his children and grandchildren in Minneapolis, MN, Freeport, ME, and Seattle, WA. Charles was an avid Wisconsin Badger fan and held season tickets to football games for over 50 years and enjoyed the pre-game pep rally with the University of Wisconsin (UW) Marching band. He missed only four games over the 50+ years and traveled to many UW bowl games. He was a member of River of Life United Methodist Church. The family wishes to thank the wonderful staffs at Hospice of Southern Maine and Gosnell House in Scarborough, ME for their excellent care over the last two years. In lieu of flowers or a gift, please consider a donation in Charles’s name to Hospice of Southern Maine https://www.hospiceofsouthernmaine.org/donations-volunteering. A Memorial Service will be planned for later this summer.

The family of Charles Mook Jr. created this Life Tributes page to make it easy to share your memories.

Send flowers to the Mook family.