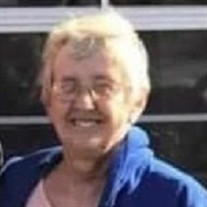 Charlotte F. Knaub, 64, of Beloit, WI, was called home Sunday, January 3, 2021 at the University Hospital, Madison, WI, following complications from a stroke. She was born February 22, 1956 in Beloit, WI, the daughter of the Neal L. and Elizabeth “Betty” (York) Jones. Charlotte attended Waterman School, Roosevelt and was a member of the 1974 class of Beloit Turner High School. She married James J. Knaub on February 15, 1975 in St. Paul Lutheran Church. They were happily married until her death. Charlotte was formerly employed by MPC, General Motors cafeteria, SSI, and Beloit Salvation Army as a cook. She loved to read and was involved with the Salvation Army Youth Groups. Charlotte was a strong woman who loved her husband and cherished her children and grandchildren, and would always do for others before herself. Survivors include her husband, James Knaub of Beloit, WI; three sons, Jason Knaub of Beloit, WI, Kevin (Kelly Lawrence) Knaub of Orfordville, WI, and Tyler Knaub of Beloit, WI; grandchildren, Nicholas and Brennen; mother of grandchildren, Amy Nunn; her mother, Betty Hannum of Beloit, WI; sisters, Debra (Bradley) Borre and Cathy Kvistad both of Beloit, WI; and brother, John (Kathy) Jones of Beloit, WI; brother-in-law and sister-in-law, Russ and Glenda Liptow; numerous nieces and nephews. She was predeceased by her father; mother-in-law and father-in-law; brother-in-law, Warren Knaub; and sister-in-law, Diane Zellmer Johnson. A memorial service for Charlotte will be at 10:30 a.m. Monday, January 11, 2021 in the Daley Murphy Wisch & Associates Funeral Home and Crematorium, 2355 Cranston Road, Beloit, WI, with Pastor Lucy Wynard officiating. Inurnment will be in Baldwin Cemetery. Visitation of remembrance will be from 9:30 a.m. until the time of service Monday in the funeral home.

Charlotte F. Knaub, 64, of Beloit, WI, was called home Sunday, January 3, 2021 at the University Hospital, Madison, WI, following complications from a stroke. She was born February 22, 1956 in Beloit, WI, the daughter of the Neal L. and Elizabeth... View Obituary & Service Information

The family of Charlotte F. Knaub created this Life Tributes page to make it easy to share your memories.

Send flowers to the Knaub family.