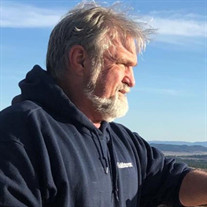 Daniel Jay Baer, 67, of Beloit, WI, went home to his Heavenly Father on Monday, March 1, 2021, in Daytona Beach, FL. He was born on April 27, 1953, in Beloit, WI, the son of William and Dorothy (Huley) Baer. Dan was a 1971 graduate of Beloit Catholic High School. He was a Vietnam Veteran serving with the U.S. Navy in Pearl Harbor. Dan married the love of his life, Carol Maresch, on October 27, 1973, in St. Jude Catholic Church, Beloit, WI. Dan was employed by Alliant Energy, retiring after more than 30 years of shift work. He was a member of the Beloit Loyal Order of the Moose Lodge #191. After retirement, Dan loved to travel the country with his wife, Carol. When they were not traveling, they were most likely planning their next trip. They spent their winters in Florida and enjoyed various trips throughout the year with family and close friends. They enjoyed traveling to Washington State, where they went on overnight boat trips crabbing. They spent a summer traveling from Wisconsin to the West Coast and back, visiting family, friends, and national parks along the way. Dan and Carol loved visiting Hawaii, the place they started their life and family together. They were always on the lookout for a new adventure. Dune buggy rides in Arizona, riding The Tail of the Dragon on the Harley through the Smoky Mountains, sailing the skies in a hot air balloon, and flying together in a biplane are only a few. Dan also enjoyed golfing trips to Myrtle Beach, fishing trips to Lake Erie, and hunting trips in Northern Wisconsin. Dan and Carol shared a passion for new experiences paving the way for the amazing journey that was their life together. When Dan's children were young, he volunteered for class activities whenever he had the opportunity. He had endless patience and was a fan favorite as a chaperone. His group always had fun stories to share. When not coaching them, his children could count on him to be their biggest fan. Whether it was sports, theater, musical performances, or academics, Dan never missed an event. He cherished the opportunity to support his children. He was a loving grandfather as well who showed his grandchildren the same love and devotion. Dan continued to volunteer later in life. He was known as Papa Baer to many children in the Stateline. At Hackett Elementary School, he helped the dual-language kindergarten classroom and any other classroom that needed assistance. No task was too big or small, and Dan completed each one while making someone's day brighter at the same time. He was able to share his love of fishing and canoeing with Outdoor Outreach campers in the summer. Helping people brought Dan joy. Dan never met a stranger. He was a joy to be around with his big smile and bigger laugh. Conversations with Dan flowed, whether discussing a Bears football game with a kindergartener or playing cribbage with a senior citizen. Those that joined the family, through birth, marriage, and adoption, were all accepted and celebrated. He loved his family and friends fiercely and would do anything for them. Dan stuck up for the underdog, believed the best about everyone he met, speaking positively of everyone he knew. Dan built a strong foundation of faith through his years at Brother Dutton, Beloit Catholic High School, and St. Judes Church. He continued to cultivate his love of God throughout his life and proclaimed his faith publicly, being baptized beside his wife on August 8, 2019. He attended Life Church in Roscoe, IL. Dan loved to share his love of his savior, Jesus Christ, with others. His family is comforted knowing he is now finding many new adventures in heaven. Survivors include his wife, Carol Baer of Beloit, WI; children, JoAnne (Matthew) Ruch of Beloit, WI, Brian (Kimberly) Baer of Neenah, WI, and Nicholas (Michelle) Baer of Belleville, WI; grandchildren, Equento, Johanne; Montgomery, Moses, William, Abby, Brady, and Bronko; siblings, Diane (Dale) Moyer of Elgin, IL, Mary Ann (Patrick) McNamee of Menasha, WI, William (Gwenn) Baer of Everett, WA, and Suzanne Baer of Beloit, WI; sisters-in-law, Georgana Cruse of Willard, WI, and Kathy Maresch of Eau Claire, WI; many nieces and nephews. He was predeceased by his parents, William and Dorothy Baer, parents-in-law, Bruce and Ruth Maresch, and brother-in-law, Darryl Maresch. A memorial service will be held at 11:30 a.m. on Saturday, July 24, 2021 in the Daley Murphy Wisch & Associates Funeral Home and Crematorium, 2355 Cranston Rd., Beloit, WI. Visitation of remembrance will be from 10:30 a.m. until the time of service Saturday in the funeral home.

The family of Daniel J. Baer created this Life Tributes page to make it easy to share your memories.

Send flowers to the Baer family.