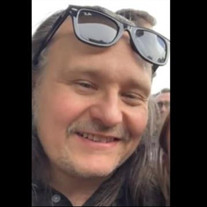 On August 16, 2021 our dear, sweet Dan Bergeson, 52, passed away peacefully at home. “Dan the Man” or “Dan Sedan” as he was sometimes affectionately called by his nephews, was born on September 25, 1968 in Beloit, Wisconsin. He was the only boy with four other sisters, two older, and two younger. Dan grew up in Orange County, California and was a sweet but rambunctious boy. Beginning in his teenage years and staying with him for his entire life, Dan grew an unyielding affection for music, cinema, and writing. He attended and received his Bachelor of Science degree, Summa Cum Laude, from Colorado University, Boulder where he majored in Film Studies and minored in Humanities and Scandinavian/Swedish Studies. His days at CU Boulder were some of the most rewarding experiences of his life. Dan was nothing short of brilliant, and was known in his family for easily being the smartest. Dan often wrote his own short stories, poems, and songs. He could, on the spot, come up with a little ditty or poem, often humorous, for any occasion. Dan loved to attend various film festivals and had a life-long dream of becoming an actor or director. He also volunteered annually at the Mendocino Film Festival. Dan did get the opportunity to work on the set of some movies during his time in Los Angeles, CA, and even had the chance to appear on National Television with Andy Milonakis on his special episode of the Jimmy Kimmel Live show. Dan spent the last decade or so living in Mendocino, CA, where he felt truly at peace and at home, enjoying the quiet solitude of the forest. For roughly the past ten years, Dan worked for Corners of the Mouth store and was a full collective member there. Dan absolutely loved this job and all the people he worked with there. Admired by his coworkers and passionate about his work, he was able to participate in almost all duties at this store and handled many orders, trained people, and eventually was elected as the Chief Executive Officer. Being so engaged with the community, Dan also volunteered for many years at the Mendocino Public Library. Dan was most known for his infectious positive attitude, smile, and wonderful sense of humor. He was a man of integrity and was known for being genuine, kind, and unassuming to everyone he met. His family and friends will miss the deep engaging intellectual conversations with Dan that he was so appreciated for. He is sorely missed by all who knew him. Dan Bergeson is preceded in death by his father, Martin A. Bergeson, and is survived by his mother, Penelope M. Bergeson; his siblings, Lisa Bergeson, brother-in-law Victor Hernandez, Laurie Bergeson, Lynn Bergeson, and Lee Bergeson-Forsberg and brother-in-law Jesse Forsberg; and countless nieces, nephews, and grand nieces and nephews. A Memorial Service for Daniel and his father, Martin "Marty" will be held at 11:00 a.m. on Wednesday, October 13, 2021 in Our Lady of the Assumption Catholic Church, 2222 Shopiere Rd., Beloit, WI. Inurnment will be in Mt. Thabor Cemetery. In lieu of flowers donations can be made in Dan Bergeson's memory to the San Fransisco Silent Film Festival at https://silentfilm.org/support/donate/.

The family of Daniel George Bergeson created this Life Tributes page to make it easy to share your memories.

Send flowers to the Bergeson family.