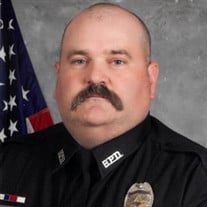 Daniel J. “Wolf” “Diesel” Daly, 48, of Beloit, WI, devoted son, brother, husband, father, and role model, passed away due to complications of COVID-19 on Monday, November 15, 2021 at Swedish American Hospital in Rockford, IL. He was born on April 2, 1973, in Monroe, WI, the son of Thomas and Marilyn (Beer) Daly. Dan was a 1991 graduate of Argyle High School. He furthered his education at UW Platteville where he graduated in 1995 with his degree in Criminal Justice. Dan married his soulmate, Bridgett Majerus on September 21, 2013 in Beloit, WI. Dan started his career in Law Enforcement at the Fort Atkinson Police Department, he then went to work for the Rockton Police Department on August 22, 1995. Dan was one of the original creators of the Rockton Police Association. On June 1, 1996 he joined the Metro Center Police Department (BMO Harris) and on May 3, 1997 he went to work for the Beloit Police Department. At the time of his passing, he was employed with the Beloit Police Department, Rockton Police Department, the Metro Center Police Department (BMO Harris) as well as Bank Security which he started on February 10, 2013 and Northern Illinois Security Investigations since July 25, 2017. Dan was part of the Assessment and Recruitment Team, a Field Training Officer, and a member of the Beloit Police Department Honor Guard. He was certified in Law Enforcement in Illinois and Wisconsin for nearly 25 years. Dan was awarded the City of Beloit Officer Spotlight in 2020. Dan was an excellent father and role model to his kids. He loved spending time with his family. Dan enjoyed concerts and monster trucks. He was an outdoors man and enjoyed hunting and fishing. Dan loved to travel. Survivors include his wife, Bridgett; sons, Geoffrey and Jacob; parents, Thomas and Marilyn Daly of Argyle; siblings, Tom III (Michelle) Daly, Tim (Kathy) Daly, Suzanne (David Trzebiatowski) Daly and Jon (Tara) Daly; mother and father-in-law, Mary Ann and Monroe Thole; brothers and sisters-in-law; nieces, nephews, aunts, uncles, other relatives, friends and his forever family, the many members of Law Enforcement. Dan was predeceased by his grandparents. A Visitation of Remembrance for Dan will be held from 4:00 p.m. to 8:00 p.m. on Tuesday, November 23, 2021 in the Daley Murphy Wisch & Associates Funeral Home and Crematorium, 2355 Cranston Rd., Beloit, WI. A Funeral Service will be held at 11:00 a.m. on Wednesday, November 24, 2021 in Our Lady of the Assumption Catholic Church, 2222 Shopiere Rd., Beloit, WI, with Fr. Michael Resop officiating. Burial will be in Newark Cemetery.

The family of Daniel Daly created this Life Tributes page to make it easy to share your memories.

Send flowers to the Daly family.