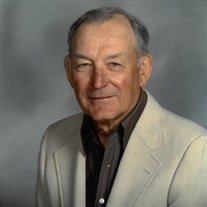 David Addison Ferwerda, 86, of Clinton, WI, died on Sunday, June 27, 2021 in his home. He was born on July 13, 1934, in Beloit, WI, the son of James and Alice (Bade) Ferwerda. David was a veteran serving with the U.S. Army. He was deployed to France and was the Battalion Expert Marksman “Sniper” and was awarded Soldier of the Month, twice. David was employed by General Motors for 30 years, retiring in 1983. He was also a full-time farmer on his family farm. He was a member of Our Lady of the Assumption Catholic Church. David was also a member of the UAW Local #95. He greatly loved animals, especially his dogs. David enjoyed traveling, especially to Canada and Africa. Survivors include his brother, Dr. James Ferwerda of Kenosha, WI; nieces, Ellen and Katherine; nephew, Peter and their children, Colt, Adam, and Paul; several cousins. He was predeceased by his parents and many close friends. A Funeral Mass of Christian Burial will be at 10:30 a.m. on Friday, July 2, 2021 in Our Lady of the Assumption Catholic Church, 2222 Shopiere Rd., Beloit, WI, with Fr. Michael Resop officiating. Burial will be in Mt. Thabor Cemetery. A Visitation of remembrance will be from 9:15 a.m. until 10:15 a.m. Friday in the church. Memorials in his name may be given to the Humane Society of Southern Wisconsin.

The family of David A. Ferwerda created this Life Tributes page to make it easy to share your memories.

Send flowers to the Ferwerda family.