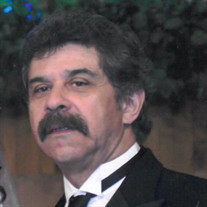 David Phillip Hernandez, 72, of Beloit, WI, died on Wednesday, November 18, 2020 in Mercy Hospital, Janesville, WI. He was born on February 29, 1948 in Beloit, WI, the son of John and Gertrude (Pastore) Hernandez. David graduated from Our Lady of the Assumption Elementary School and was a 1966 graduate of Beloit Catholic High School. He was a veteran serving with the U.S. Army during the Vietnam War from 1969 until 1971. David received his Associate of Science Degrees in Accounting and Marketing from Blackhawk Technical College. He received his Bachelor Degree in Business, graduating Magna Cum Laude from the Upper Iowa University. David began his working career with Outboard Marine Corporation. He had many memorable jobs but his employment with Harley Davidson Motor Company was dear to him. David ended his working career in 2007 at the Tote Cart Company in Rockford, IL. He was an avid record collector and a well-known accomplished musician, especially in the Beloit area, playing many nights and weekends at the Pop House. David’s love and passion was his 1963 Split Window Corvette, but his life was his family, especially his grandchildren along with his love of music. Survivors include his daughter, Angela (Trevor) Morgan of South Beloit, IL; grandchildren, Adrian Hernandez, Ethan Morgan, Reilly Morgan, and Kaydence Morgan; brother, Jim (Jean) Hernandez of Beloit, WI and their children, Jessica (Clint), John, Jared, and Joey Hernandez; sister, Cyndi (Robert) Whitman of Winter Garden, FL and their children, Tara (Ashley) Whitman, Andrea Whitman, and Tamra (Justin) Seeley; the mother of his daughter, Lesley Hernandez; many other nieces and nephews. He was predeceased by his parents; aunts, uncles and cousins, Rocco and Larry Pastore. A Graveside Service for David will be at 11:00 a.m. on Saturday, November 28, 2020 in Floral Lawn Cemetery, South Beloit, IL, with Military Honors accorded by the V.F.W. Mead-Allen Post #2306. Daley Murphy Wisch & Associates Funeral Home and Crematorium, 2355 Cranston Rd., Beloit, WI, assisted the family with arrangements. In lieu of flowers, a memorial in David’s name will be established at a later date.

David Phillip Hernandez, 72, of Beloit, WI, died on Wednesday, November 18, 2020 in Mercy Hospital, Janesville, WI. He was born on February 29, 1948 in Beloit, WI, the son of John and Gertrude (Pastore) Hernandez. David graduated from Our Lady... View Obituary & Service Information

The family of David P. Hernandez created this Life Tributes page to make it easy to share your memories.

Send flowers to the Hernandez family.