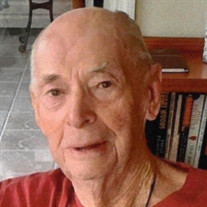 David Bruce Lang, 86, of Roscoe, IL, died on Sunday, April 18, 2021 at North Pointe Terrace, Roscoe, IL. He was born on April 21, 1934 in South Beloit, IL, the son of William and Ethel (Ford) Lang. David was a 1952 graduate of Beloit Memorial High School. He married Kathryn Darien Keeler on September 13, 1952. David received his Associate’s Degree in Fire Science from Blackhawk Technical College in 1978. David was a farmer and volunteer firefighter for the Town of Turtle until he became a firefighter for the Town of Beloit in 1957. In 1961, he joined the City of Beloit Fire Department. David was promoted through the years up to shift commander, retiring in 1989. On his days off from the Fire Department, he did carpentry and general contractor work. David loved his family very much. He enjoyed gardening, woodworking, traveling, fishing, boating, golfing, and spending time with his family and friends. Survivors include his wife, Kathryn Lang; children, Charles (Joyce Harms) Lang, Linda Prowse, Jon (Jane) Lang, and Nancy Lang; grandchildren, Emma (Jered Soravia) Prowse, Stacy (Edward Anderson) Prowse, Jessica (Hannah Soule) Lang, Amy (Jon) Smith, Jason (Lauren) Fries, and Michael (Kelli Fischer) Lang; seven great grandchildren; numerous nieces, nephews, and cousins; and his newly adopted kids and grandkids at North Pointe. He was predeceased by his parents; son-in-law, Roger Prowse; and siblings, Ray, Donald, and Dorothy. The family would like to extend their appreciation to the entire staff at North Pointe Terrace and Beloit Regional Hospice for their excellent care of David. A celebration of David’s life will be held at a later date. Daley Murphy Wisch & Associates Funeral Home and Crematorium, 2355 Cranston Rd., Beloit, WI, assisted the family with arrangements. In lieu of flowers, memorial donations may be made to Beloit Regional Hospice.

The family of David B. Lang created this Life Tributes page to make it easy to share your memories.

Send flowers to the Lang family.