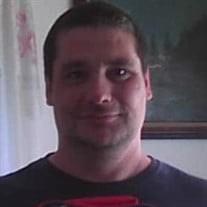 David A. Starkey, 50, of Beloit, WI, passed away on Wednesday, January 26, 2022 in his home. He was born on March 14, 1971 in Chandler, OK, the son of Jack and Margaret (Rayburn) Starkey. David married Cynthia Green on August 31, 1996 in Anchorage, AK. David was employed as a Logistics Coordinator. David Starkey was bigger than life. He never met a stranger and was always willing to lend a hand. Always putting others needs before his own, he forgave easily and loved with all his heart. David had a great sense of humor and loved a good prank. He would go far to win an argument including saying “I love you more” at the end of a call and quickly hanging up so he got the last word. Most important his family was his world. His wife Cindy and his children Megan and Pike were his pride and joy. David was the heart of our family. The best husband, father, son, brother and uncle we could ever wished for. He was always active and pushed himself until his body got tired and decided to rest and wait for the rest of us to catch up. This isn’t goodbye it’s see you later. He will be waiting for us to find the rainbow connection and meet him in Heaven. Until then it’s our turn to get the last word. We Love You More! Survivors include his wife, Cynthia Starkey; children, Megan (Rusty) Hargreaves and Pike Starkey; parents, Margaret and Fred Judson; mother-in-law, Kathryn Green; father, Jack D. Starkey Sr; siblings, Shelly (Justin) Gabbard, Danel (Karen) Henshaw, Anne (Jimmy) Pearce, Norman Judson and Jack (Kim) Starkey Jr.; several nieces, nephews, aunts, uncles, cousins and other relatives. He was predeceased by his father-in-law, Robert Green. There will be no services for David.

The family of David A. Starkey created this Life Tributes page to make it easy to share your memories.

Send flowers to the Starkey family.