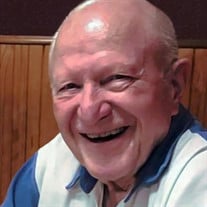 Donal Joseph Wolf, 96, of Beloit, WI, died on Friday, December 11, 2020 in the VA Hospital, Madison, WI. He was born on March 19, 1924 in Sheboygan, WI, the son of Lester M. and Josephine (Pfister) Wolf. Donal was an Eagle Scout and a 1945 West Point Military Academy Graduate. Upon graduation, he served as an officer with the U.S. Army, serving in Italy, Kansas and Bermuda. He married the love of his life, Evelyn Ayers, on October 16, 1945 at West Point, NY. After having celebrated 72 years of marriage, she predeceased him on January 1, 2018. Donal was employed by the Beloit Corporation for 32 years, retiring as Chief Applications Engineer in 1986. He had a strong devotion to his family, who was his greatest source of happiness. Donal brought joy to everyone who crossed his path and always went the extra mile when someone needed a kind word or helping hand. He treated friends as family and family as friends. He had a great sense of humor and an infectious laugh. He and Ev enjoyed trips to the Northwoods where they loved to fish. He was a charter member of Our Lady of the Assumption Catholic Church, where he served as a Lector and Eucharistic Minister at Mass and to the homebound. He had a strong devotion to the Blessed Mother and remained a positive example to his family and friends. He will be dearly missed. Survivors include his children, Michael (Jennifer) Wolf, Milwaukee, WI; Patricia Krejci, Pewaukee, WI; Suzanne (Ivan) Naiman, Cherry Hills Village, CO; Timothy (Kathy) Wolf, Fuquay Varina, NC; Steve (Beth) Wolf, Beloit, WI; Thomas Wolf, Mesa, AZ; Jeanne (Jeff) Berner and Mary (Richard) Rayment, both from Beloit, WI; 25 grandchildren, 42 great grandchildren and one great-great grandchild; sister-in-law, Kay Ayers Finger, Sheboygan, WI; numerous nieces and nephews. He was predeceased by his parents; two children, Mary and Joseph; son-in-law, John Krejci; one grandchild and two great grandchildren; sisters and brother in-laws, Jeanne and Eugene Hildebrand and Dolores and Dick Gottsacker. The family wishes to thank the staff at Beloit Senior Living, who assisted with his care and the VA Hospital for the beautiful and memorable Military Honors escort that his family was able to witness via video conference. A Memorial Mass of Christian Burial for Donal will be 11:00 a.m. Friday, January 15, 2020 at Our Lady of the Assumption Catholic Church, 2222 Shopiere Road, Beloit, WI, with Fr. Michael Resop officiating. Inurnment will be in the Mt. Thabor Mausoleum. Memorials may be given in his name to Our Lady of the Assumption (or OLA) GODS Fund.

The family of Donal Joseph Wolf created this Life Tributes page to make it easy to share your memories.

Send flowers to the Wolf family.