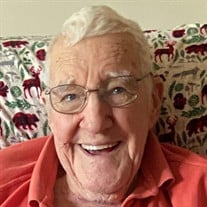 Donald Steele Perkins, 90, of Beloit, WI, died on Saturday, March 6, 2021 in his home. He was born on March 22, 1930 in Chicago, IL, the son of Roger and Ethel (Douglas) Perkins. Donald was a veteran serving with the U.S. Navy from 1951 until 1953. He received his Bachelor’s Degree from Purdue University. He married Tal Mak Chon on April 7, 1984 in Chicago, IL. Donald was employed by Triton Industries as an accountant. He loved sports and was an avid Chicago Bears and Chicago White Sox fan. Donald was very smart, caring and supportive. He was a loving husband, father, grandfather, great grandfather and will be missed by all. Survivors include his wife, Tal Mak of Beloit, WI; children, Jayson (Sandra) Weber of Chicago, IL, and Shelia Connell of Janesville, WI; grandchildren, Jennifer, Riley, and Colton; great grandchildren, Isabella, Olivia, and Nathan; nephews, Gary and Ronnie Perkins. He was predeceased by his parents. Per Donald’s request, there will be no services. Daley Murphy Wisch & Associates Funeral Home and Crematorium, 2355 Cranston Rd., Beloit, WI, assisted the family with arrangements.

The family of Donald Steele Perkins created this Life Tributes page to make it easy to share your memories.

Send flowers to the Perkins family.