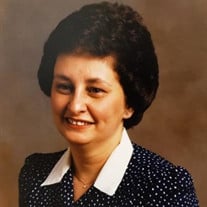 Donna Stoner, 84, of Footville, WI formerly of Beloit, WI, passed away on Monday, January 31, 2022 at St. Elizabeth Manor in Footville. She was born on December 26, 1937, in Dodge Center, MN, the daughter of Glen and Mildred (Evans) Socwell.... View Obituary & Service Information

The family of Donna Stoner created this Life Tributes page to make it easy to share your memories.

Send flowers to the Stoner family.