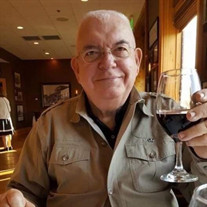 Douglas Michael Popp, 81, of Clinton, WI, entered into eternity on Friday, June 25, 2021 at Agrace Hospice Care surrounded by loved ones. Doug was born December 28, 1939 in Rochester, NY, the son of Katherine (Carey) Popp, and lovingly raised in Cranford, NJ, by his mother, sister Regina (Popp) Charles and extended family including his beloved Uncle George and Aunt Maxine Carey. Doug was a graduate of Cranford (NJ) High School in 1957. After, Doug proudly attended The Virginia Military Institute, graduating in 1961 with a bachelor’s degree in Microbiology and Chemistry. Upon graduation, Doug was commissioned into the United States Army, proudly serving his country until his honorable discharge in 1969. Following his discharge, Doug began a long career, which culminated in founding his own company, Media Separations, in 1988, which he continued to operate until his final days. Doug married his first love, Janet Rakip, in 1964, sharing 47 beautiful years and four children: Patrick (Jeany) Popp, Erin (Daniel) Connell, Carrie (Ron) Flock and Tim (Jenny) Popp. The family grew to include 10 adoring grandchildren and three great grandchildren. After Janet met her Lord in 2010, Doug found love again, marrying Mollie (Ray) in 2013, sharing eight years of love and happiness. Doug will be greatly missed by those whose lives he touched in his 81 years. He was especially proud of his VMI roots and his strong bond to his VMI “Brother Rats” from the “Maverick class of ‘61”. Doug’s impact on his friends and family are immeasurable; Father, Grandfather, Husband, Uncle, Son, Brother, Friend. “See you later,” Doug…and “have fun!” A celebration of life memorial service will be held at 4 p.m. on Thursday, July 1, 2021 in the Daley Murphy Wisch & Associates Funeral Home and Crematorium, 2355 Cranston Rd., Beloit, WI. Visitation of Remembrance will take place from 3 p.m. until the time of the service on Thursday in the funeral home. If you would like to make a donation in Doug's memory, please consider Agrace whose staff helped guide Doug and family through his final days with dignity, honor and grace. https://www.agrace.org/donate/

The family of Douglas M. Popp created this Life Tributes page to make it easy to share your memories.

Send flowers to the Popp family.