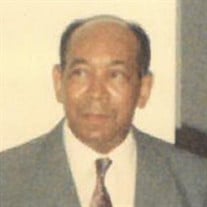 Earl Nobles was born in Laurel, MS on May 14, 1927 to the late Mattie and Ely Nobles. Earl attended Sandy Gavin Elementary School and Oak Park High School. After high school, Earl enlisted into the Army on July 7, 1945 at Camp Shelby in Hattiesburg, MS. While being enlisted he was sent to fight in the war; World War II that is. In 1946 he met Delia Mae McDonalds (Nobles) in Laurel, MS and married her shortly after. “She smell like a flower, she was the best smelling woman I ever met”, he stated. They had three children before moving their family to Decatur, IL. He worked with heavy machinery at The Caterpillar Company and worked in an Industrial Plant for the steel mill. With his time in Decatur, IL, he and Delia had two more children before moving to Chicago in the late 1950’s, where the other four children were born. He became a big Cubs and White Sox fan. Earl loved his tv shows called, Soul Train, The Real McCoy’s, and All in the Family. He also was a member of the American Legion West-Field Post #48. In 1991 he retired from Dominick’s. In his 94 years of full life lived, he had ten children (six boys), Edward Earl (Rose Marie), Thomas Bernard, Jamal Sharif, Steven Anthony and Kyle Patrice; (four girls), Rosemary Campbell, Vicky Diane, Cynthia Laquette and Regina Lorez (Herschel) Houston. Proceeded in death by his mother and father, Mattie and Ely Nobles; sisters, Irene Griffin and Josephine Nobles; brothers, Willie, Chester, George, Charles, EW, Ulysses, TC and Joseph Nobles; beloved son, Larry Darnell Sr.; and third generation grandchild, Jamiya Shaw. He leaves behind his love, Delia Mae; nine children; nieces and nephews; and a fruitful of great to third generation great grandchildren. A Funeral Service for Earl will be held at 12:00 p.m. on Thursday, November 18, 2021 in the Daley Murphy Wisch & Associates Funeral Home and Crematorium, 2355 Cranston Rd., Beloit, WI with Elder Cheryse Nobles officiating. Visitation of Remembrance will be held from 11:00 a.m. until the time of service Thursday in the funeral home.

Earl Nobles was born in Laurel, MS on May 14, 1927 to the late Mattie and Ely Nobles. Earl attended Sandy Gavin Elementary School and Oak Park High School. After high school, Earl enlisted into the Army on July 7, 1945 at Camp Shelby in Hattiesburg,... View Obituary & Service Information

The family of Earl Nobles created this Life Tributes page to make it easy to share your memories.

Send flowers to the Nobles family.