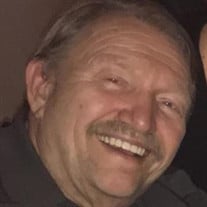 Eddy D’Hanis, 75, of South Beloit, IL, passed away on Saturday, November 6, 2021 in his home. He was born on January 13, 1946 in Kemzeke, Belgium, the son of Omer and Alfrieda (Triest) D’Hanis. Eddy graduated valedictorian from South Beloit High School in 1963. He was a veteran of the United States Air Force, serving in the Vietnam War. Eddy married Diana Pospischil on January 13, 1968 in South Beloit, IL. She predeceased him on April 5, 2015. Eddy was employed by Mattison Machine Works for 30 years. He was a member of the South Beloit American Legion Post #288 and the South Beloit Lions Club. Survivors include his daughter, Patricia (Dave) Wagner of Rockford, IL. Eddy was predeceased by his parents and son, Michael. A Funeral Mass of Christian Burial for Eddy will be held at 10:00 a.m. on Saturday, November 13, 2021 in St. Peter Catholic Church, 620 Blackhawk Blvd., South Beloit, IL with Fr. Romeo Pavino officiating. Burial will be in Floral Lawn Cemetery. Visitation of Remembrance will be held from 5:30 p.m. to 7:30 p.m. with a rosary to be recited at 5:15 p.m. on Friday, November 12, 2021 in the Daley Murphy Wisch & Associates Funeral Home and Crematorium, 2355 Cranston Rd., Beloit, WI. In lieu of flowers, memorials may be made in his name to Beloit Regional Hospice.

The family of Eddy D'Hanis created this Life Tributes page to make it easy to share your memories.

Send flowers to the D'Hanis family.