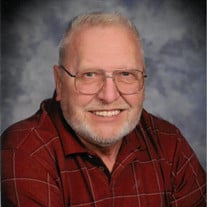 Edward Merlin Zhe Sr., 79, passed away on Tuesday, March 2, 2021 at Beloit Memorial Hospital due to complications from a massive stroke. He was born on September 17, 1941 at home in Jackson County (near Black River Falls) Wisconsin, the son of Merlin and Bernice (Watenphul) Zhe. He came to the Beloit area when he nine years old and has been a resident ever since. He attended schools in South Beloit and graduated with the class of 1960. Ed married Judy Ann Alverson on February 17, 1962 in the Faith Lutheran Church with Reverend Carl Ispen officiating. Ed served his meat cutting apprenticeship with the Century Super Markets in South Beloit, IL. He worked as a journey-man meat cutter and manager in meat markets in the Southeastern Wisconsin area for over 50 years. Ed worked for the Century Supermarkets for 20 years before moving on to other stores. He was an expert in his field and was respected by all. After retiring in 2004, Ed traveled to Alaska and Hawaii. He enjoyed getting breakfast with his friends at the West Side Family Restaurant. Ed enjoyed hanging out with friends, being at home with his family and playing on his iPad. He also was an avid bowler and was in leagues for many years. Ed liked to watch Golf matches, especially Tiger Woods. Survivors include, his wife of 59 years, Judy; two children, Edward Jr. (Christine) of Milton, WI, and Amy (Patrick) Grice-Kniffin of Beloit, WI; seven grandchildren, Ian R. Grice of Beloit, WI, Colin E. Grice of Springfield, IL, Sarah J. Zhe of Sun Prairie, WI, Rebecca A. Zhe of Milton, WI, Benjamin E. Zhe of Milwaukee, WI, Nicole R. Kniffin of Beloit, WI, Alexander J. (Brea) Kniffin; two great-grandchildren, Mason A. Kniffin and Madalynne R. Kniffin of Colorado Springs, CO; sister, Marcella (Fred) Petrick of Janesville, WI; nephews, Carl (Cindy) Petrick of Janesville, WI, and Fred Jr. (Tony) Petrick; several cousins; beloved cousin, Joan Johnson Hayes; other relatives and friends. Ed was predeceased by his parents, Merlin and Bernice Zhe; grandparents and dear cousin, Stephen Johnson. He was a long-time friend of Bill W. and lived by the motto: “One Day at a Time.” He was also a “friend” of Sun Valley Presbyterian Church in Beloit for many years A visitation for Ed will be from 2:30 p.m. until 4:30 p.m. on Monday, March 8, 2021 in the Daley Murphy Wisch & Associates Funeral Home and Crematorium, 2355 Cranston Dr., Beloit, WI. followed by a service of remembrance at 4:30 p.m. with Pastor Dave Ewing officiating in the Daley Murphy Wisch Funeral Home. Social distancing and face masks are required. Memorials may be given to the Ronald McDonald House in Madison.

Edward Merlin Zhe Sr., 79, passed away on Tuesday, March 2, 2021 at Beloit Memorial Hospital due to complications from a massive stroke. He was born on September 17, 1941 at home in Jackson County (near Black River Falls) Wisconsin, the son... View Obituary & Service Information

The family of Edward M. Zhe Sr. created this Life Tributes page to make it easy to share your memories.

Send flowers to the Zhe family.