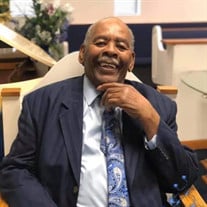 The Life and Legacy of Elder David Barnett “May the work I’ve done speak for me” On Friday April 30, 2021 at 6:14am Elder David’s earthly season ended and he entered into eternal rest at the age of 85yrs old. The Man: Elder David Barnett was born on August 24, 1935 in Medon,TN to the union of Ruth Carter and L.Q. Barnett. He was the second oldest of eleven siblings. He received his formal education at Span Rosenwahl Public School Medon, TN. He continued his education at Blackhawk Technical College in Janesville, WI. He moved from Tennessee to Beloit, WI in 1967. He worked for Warner Electric, Fairbanks Morse, Beloit School District and finally retiring from Beloit Corporation in 1999. On December 16, 1972 he married the love of his life Norva (Maurice) Marshall of LaGrange IL. Together they have four children and five grandchildren. The Servant: Elder Barnett served in the United States Army and was a Veteran of the Korean Conflict Era and Peacetime. He was honorably discharged July 5, 1957. He gave his life to Christ at a young age. His first scripture learned was John 3:16…For God so loved the world…He accepted his call into the ministry in April of 1983 and was ordained and received his ministerial license under the leadership of the late Pastor Ernest K. Roman of New Covenant Deliverance Tabernacle. He was a member of the Beloit Ministers fellowship for over 20yrs. Elder Barnett went on to serve in his calling by spreading the Gospel as a Chaplin for the Winnebago County Jail. He organized Brothers to Brothers bible study as well as counseling and praying for many. He continued his ministry at Fountain of Life THC under the leadership of Pastor Lawrence A. Hoskins until the time of his death. He will forever be remembered as a Gospel giant and legend of the Beloit community for his decades of singing and preaching the Gospel of the Lord Jesus Christ. He started singing the Gospel as a young man with Sons of Dixies of Jackson TN. After moving to Wisconsin, he was one of the original members and lead singers of the Skylark Gospel Singers. In his years of singing, he was privileged to sing with many nationwide Gospel greats; Canton Spirituals, Spencer Taylor and the Highway QC’s, Willie Neal Johnson and the Gospel Keynotes, George Dean and The Gospel Four and many more. He was instrumental in organizing the “Men of Fountain Male Chorus” and continued to sing and travel with them until his health began to decline. Elder Barnett sang his last song at Fountain of Life THC (his church home) on November 1, 2020 “I’m alright now”. The Legacy: He leaves to cherish his memories, a devoted wife of 48yrs Norva (hun bun), Four beautiful children: Craig (Lorna) Barnett-Tomlin of Jackson, TN, Anjanette (Kelvin) Sherrod, David Anthony (Annie) Barnett, Anderia (Randall) Barnett-Douglas all of Beloit WI. Three sisters, Rosie Curry of Beloit, WI, Edna Barnett of Jackson TN, and Patricia (Reginald) Barnett-Fuller of Nashville TN. Two Brothers, Herman Barnett of Jackson TN and Alonzo Barnett of Beloit WI. Five Grandchildren, Craig David, Shannon Louise, Allen Devon, Jaheim Crischawn, and Sterling Uriah. God Children, Julius Beard, Susan Pulliam and Alexandria Leavy. One sister-in-law, Maudie Evans and two brothers-in-law, Jeff (Mary) Marshall and Marvin (Pearl) Marshall. A host of nieces, nephews, cousins, relatives, friends and three special friends and brothers in Christ Pastor Clifton White, Pastor Bonnie Harris and Sylvester (tuffy) Davis. He was preceded in death by his parents, six sisters, aunts and uncles. Also, his very close friends of the Skylark Gospel Singers; Rev. Paul Kilgore, Ezell Keeton, Jimmy Moore and one special brother Ivory Frank Carroll Sr. Funeral service for David will be at 11:00 a.m. Saturday, May 8, 2021 in Emmanuel Baptist Church, 1151 E. Grand Ave., Beloit, WI. Burial will be in East Lawn Cemetery. Visitation of remembrance will be from 5 to7 p.m. Friday in the Daley Murphy Wisch & Associates Funeral Home and Crematorium, 2355 Cranston Road, Beloit, WI. Visitation will also be from 10:00 a.m. until 10:45 a.m. Saturday in the Church.

The family of Elder David Barnett created this Life Tributes page to make it easy to share your memories.

The Life and Legacy of Elder David Barnett
“May the work I’ve...

Send flowers to the Barnett family.