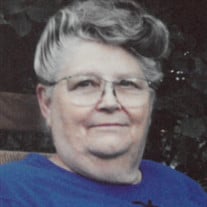 Eliza A. “Bay” Graham, 87, of Beloit, WI, passed away on Tuesday, August 10, 2021 at Green Knolls in Beloit surrounded by family. She was born April 5, 1934 in Cuzzie, WV, the daughter of Avery and Hester (Hayes) Baker. Eliza married Louie H. Graham on May 8, 1948 in Osceola, AR. He predeceased her on February 24, 2016. Bay was a homemaker until her husband got sick in 1966. She was previously employed by Admiral in Harvard, IL, Chicken Charlie’s, Cozy Corner, Calico Cupboards in Muscoda, WI, and Hillside Drive Inn in Traverse City, MI, Amway Sales, and Stanley Home Products for 17 years. Bay was also employed by Eckman’s Home for Teenagers in Caledonia, IL, The Landing, and most recently for the City of Beloit as a caregiver for 13 years, retiring in 2006. She was a very involved member of the First Pentecostal Church, South Beloit, IL, Bay sang in the choir, did all the church decorations, potlucks and was the president of the Ladies Auxiliary. Bay was an avid reader and enjoyed doing word searches. Survivors include her children, Herbert (Kay) Graham, Eddie Graham and Shirley Ann (David) Peck all of South Beloit, IL, Vaughn Graham of Beloit, WI, and John (Diane) Graham of Azle, TX; 16 grandchildren; 26 great grandchildren; four great-great grandchildren; six sisters; several nieces, nephews, other relatives, and friends. She was predeceased by her son, Jerry Graham; parents; one brother; one great grandchild, Tia Saunders; one great-great grandchild, Jaycee Henthorn; two brothers-in-law, two sisters-in-law, and one nephew. A Funeral Service for Bay will be held at 11:00 a.m. on Tuesday, August 17, 2021 in the Daley Murphy Wisch & Associates Funeral Home and Crematorium, 2355 Cranston Rd., Beloit, WI with Chaplain Mark Maxted officiating. Burial will be in the Rockton Cemetery. Visitation of Remembrance will be held from 5:00 p.m. until 7:00 p.m. on Monday, August 16, 2021 in the funeral home and again at 10:00 a.m. until the time of service on Tuesday in the funeral home.

The family of Eliza A. "Bay" Graham created this Life Tributes page to make it easy to share your memories.

Send flowers to the Graham family.