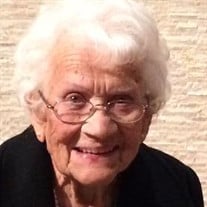 Esther Edith Carter, 96, of Beloit, WI, passed away on Monday, February 15, 2021 at Willowick. She was born on May 2, 1924 in Whitinsville, MA, the daughter of Anton and Hilja (Johnson) Harju. Esther was a 1941 graduate of Wayne County High School in Jesup, GA. She married Melvin Carter on February 8, 1946 in Jesup, GA. He predeceased her on December 25, 2014. Esther was employed as an Executive Secretary for Cherry & Fabroni, retiring in 1978. She was a member of the Redeemer Evangelical Covenant Church, Beloit, WI. Esther and Melvin were very adventurous and active. They often went snowmobiling and biking, backpacking in the Rocky Mountains and the Apostle Islands. They enjoyed traveling to all 50 states, wintering in Texas and spending Christmas in California with their daughter. They also traveled to Brazil to visit their son and daughter-in-law. Spending Sundays with her family for dinner were very important to her. Esther, being a first generation Finlander, was proud of her Finnish heritage. The Finns have a characteristic known as “Sisu”, which emulates as a presence of stoic determination, resilience, courage and perseverance. Esther was a prime example of this essence. Survivors include her children, Roy (Barbara) Carter of Shopiere, WI, and Bonnie (Don) Stevenson of Carlsbad, CA; grandchildren, Denise Carter, Bryan (Mandi) Carter, Donny (Emily) Stevenson and Kara (Todd) Anderson; great grandchildren, Matthew, Branden, Cameron, Harmony, Melody, Brienne, Cody, Drew and Reid; and great-great grandchildren, Madelyn, Jordan and Everly. Esther was predeceased by her husband, parents, one sister and one brother. A Celebration of Life for Esther will be held at 10:00 a.m. on Saturday, July 24, 2021 in the Redeemer Evangelical Covenant Church, 2500 Prairie Ave. Beloit, WI, with Pastor Christopher Carlson officiating. A gathering in the fellowship hall will follow. Esther’s favorite color was pink, in her honor please join us in wearing pink. Daley Murphy Wisch & Associates Funeral Home and Crematorium, 2355 Cranston Rd, Beloit, WI, assisted the family.

Esther Edith Carter, 96, of Beloit, WI, passed away on Monday, February 15, 2021 at Willowick. She was born on May 2, 1924 in Whitinsville, MA, the daughter of Anton and Hilja (Johnson) Harju. Esther was a 1941 graduate of Wayne County High... View Obituary & Service Information

The family of Esther E. Carter created this Life Tributes page to make it easy to share your memories.

Send flowers to the Carter family.