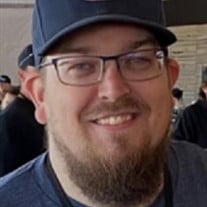 Evan Mikel Makinen, our beloved son, brother, uncle, family member, and friend, unexpectedly left us on February 7th, 2022, at the young age of 32, in his Kenosha residence. Born January 13th 1990 to loving parents. Gerald and Bobbi (Pierce) Makinen. Evan graduated Hononegah High School in 2008. and after a couple years of considering life’s possibilities, decided to dedicate all his efforts to learning Robotics and Automated Systems at his grandfather’s and father’s alma mater Dunwoody Technical College. There, his determination and excellence led to him being inducted into the International Honors Society, Phi Theta Kappa and graduating Summa Cum Laude in 2014. Evan carried that same determination and excellence into his Systems Technician career at InSinkerator in Racine. WI., where he took pride in his work. Even though Evan was proud of the achievements and accolades, his dedication and responsibility afforded him, his light shined the brightest in his fun, adventurous, and intimate moments he shared with those close to him. From the precious carefree vacations with his family, the numeros nights surrounded by friends and those strangers yet to be friends at Fec’s, and the over exuberant high fives and bellowning of lyrics at music festivals with his eldest sister Erin, to the more intimate moments of gaming with his other sister Emilie and friends, watching Bears games and riding motorcycles with his father, or just conversing with his great aunt Jennie. His light lifted you up, comforted you, and made you feel safe. Evan was a loving son, caring and protective sibling, loyal friend, one of the loudest Chicago fans, an outgoing and inclusive person, and so much more. Everyone that had the pleasure of knowing Evan knew the only thing he enjoyed more than the precious moments in his life were the people he spent them with. In his passing, we not only lost a loved one and friend but a light that would brighten the day no matter the occasion and when it was needed the most. Survivors include his parents; sisters Erin Makinen, her spouse Jeremy Isaacs, and her children Skylor Anderson, and Zachary Isaacs of Corrollton, Ky.; Emilie Makinen her spouse Oscar Andrade and their children Haley Andrade, and Eli Andrade of McAllen TX.; Collegiate brother and mentor Alexander Ly; Kenosha mother and father Tracie and Steve; extended family, friends and his fish. Evan was preceded in death by his grandparents, Nestor (Gladys) Makinen and Gary (Patricia) Pierce. A Memorial Service for Evan will be held at 3:00 p.m. on Saturday, February 19, 2022 in the Daley Murphy Wisch & Associates Funeral Home and Crematorium, 2355 Cranston Rd., Beloit, WI. Memorials in his name may be made to the National Kidney Foundation or Dunwoody Technical College.

The family of Evan M. Makinen created this Life Tributes page to make it easy to share your memories.

Send flowers to the Makinen family.