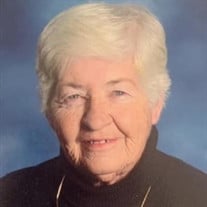 Ferne T. Stovlbeck, 84, of Beloit, WI, passed away on Saturday, September 11, 2021 at Willowick Assisted Living in Beloit. She was born on December 25, 1936 in Grand Falls, Canada, the daughter of Lawrence and Edith (Rideout) Gillespie. Ferne attended high school in Grand Falls, Canada. She furthered her education at St. Norberts earning her Bachelor’s degree in Psychology as well as her Nursing Degree from Northern Illinois University. Ferne was employed by Beloit Memorial Hospital and several other nursing facilities in the Southern Wisconsin and Northern Illinois area. She retired from nursing in 1994 and became a Pharmacy Technician in 1998, retiring in 2009. Ferne was an active member of St. Jude Catholic Church, Beloit, where she was a communion distributor, lector, part of the parish and the marion guild. She was member of the Religious Hospitallers of St. Joseph in Montreal for over 22 years. She was an avid Green Bay Packers and Chicago Cubs fan. Ferne treasured time spent with her friends and granddaughter, who was the light of her life. Survivors include her daughter, Kirsten (Michael) Symmonds of Beloit, WI; granddaughter, Reagan Watts of Beloit, WI; grandsons, Travis and Tyler Symmonds; brother, Fred (Johanna) Gillespie of Oshawa, Ontario; sister, Mary Crossman of Coconut Creek, FL; and numerous nieces, nephews and cousins. Ferne was predeceased by her parents; brother, Guy Gillespie; sisters, Ruth Kenison and Elsie McCarthy; brothers-in-law, Roger Crossman and Merlin McCarthy; and special friend, Bob Pittman. In lieu of flowers, memorials in her name may be made to St. Jude Catholic Church or to Beloit Regional Hospice. A private family service for Ferne was held.

Ferne T. Stovlbeck, 84, of Beloit, WI, passed away on Saturday, September 11, 2021 at Willowick Assisted Living in Beloit. She was born on December 25, 1936 in Grand Falls, Canada, the daughter of Lawrence and Edith (Rideout) Gillespie. Ferne... View Obituary & Service Information

The family of Ferne T. Stovlbeck created this Life Tributes page to make it easy to share your memories.

Send flowers to the Stovlbeck family.