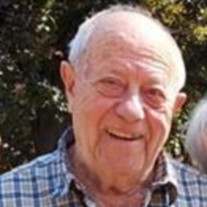 Gale Keith Hemmerling, 86, of Beloit, WI, died on Friday, January 22, 2021 at the UW Hospital, Madison, WI. He was born on September 13, 1934 in St. Paul, NE, the son of John and Olive (Van Trump) Hemmerling. Gale married Donna Brabazon on November 23, 1983 in Las Vegas, NV. Gale began his career as the owner and operator of two Standard Oil Stations. He then was employed by Stoughton Trailer as their pilot, and was the foundry supervisor at the Beloit Corporation, and retired from the Cub Foods Gas Station. He was a member of the AOPA Aviation Association. Gale loved his family and grandchildren, and over the years taught them many life lessons. He was a great story teller, who loved people and very seldom was seen with out a smile on his face. As a pilot he loved anything and everything that had to do with aviation. Survivors include his wife, Donna Hemmerling of Beloit, WI; children, Gary (Debra) Brabazon of Antigo, WI, and Lori (Kevin) Gordon of American Fork, UT; grandchildren, Mitchell (Crystal) Hemmerling, Tania (Michael) Hemmerling, Joshua (Amanda) Goodbear, Rachael Childers, Jason (Sandy) Hemmerling, Naomi Goodbear, Chris (Tracy) Hemmerling, Jill Hemmerling, Nicole (Joel) Zepeda, Matthew (Joelene) Brabazon, Stephanie (Danny) Hansen, Joshua (Tabitha) Brabazon, Jared (Holly) Brabazon, and Katey (Justin) Visser; 32 great grandchildren and nine great-great grandchildren; many nieces and nephews. He was predeceased by his parents; first wife, Carol Hemmerling; sons, Michael and Gregory Hemmerling; granddaughter, Deana Goodbear; brother, Gene (Darlene) Hemmerling; and daughter-in-law, Vicki Hemmerling. A Funeral Service will be at 1:30 p.m. on Wednesday, February 3, 2021 in the Daley Murphy Wisch & Associates Funeral Home and Crematorium, 2355 Cranston Road, Beloit, WI, with Bishop Andy Burningham officiating. Burial will be in East Lawn Cemetery. Visitation of remembrance will be from 12:30 p.m. until the time of service Wednesday in the funeral home. Memorials in his name may be given to the Alzheimer’s Association.

The family of Gale K. Hemmerling created this Life Tributes page to make it easy to share your memories.

Send flowers to the Hemmerling family.