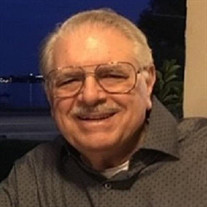 Gardner P. Grubb, 83, of Roscoe, Illinois, passed away on Thursday, September 16, 2021, surrounded by his children and grandchildren. He was born on July 21, 1938 in Chicago, IL, the son of Gardner Sr. and Sally Grubb. Gardner was a veteran on active duty with the U.S. Army from 1956-1958. On June 30, 1962, he married the love of his life, Ann Paynter in St. Francis Church, Traverse City, Michigan. She predeceased him on March 14, 2017. Gardner started his career at Lou Bachrodt Chevrolet. In 1984, he opened his first car dealership, Beloit Ford Lincoln Mercury on Broad Street in Beloit. He then moved the dealership to South Beloit in 1989 and became known as “Gardner on Gardner.” He was a proud veteran and supportive of many veteran organizations and cherished his trip with Vets Roll in 2018. Gardner loved to spend time in Traverse City, Michigan at the family home where he met his wife, Ann (Kitten). Their love story together lasted 55 years. He and his wife enjoyed traveling and traveled the world twice together. Their favorite trip was an African safari in Kenya. They also loved going to Hawaii during the winters and Gardner exclusively loved visiting the USS Arizona Memorial to take pictures to “prove it was still leaking oil.” His second favorite travel destination to capture on video was the Eiffel Tower at night in Paris, France. When he was not traveling, he was an avid collector, and he would never pass up an estate sale. Gardner’s family was everything to him. Survivors include his children, Gina (Greg – “What’s his face”) Wall and Derrick (Debbie – “Whatever you cook is wonderful”) Grubb; grandchildren, Brian Cox, Gabrielle (Ryan) Johnson (“but you doesn’t have to call me Johnson”), Breanna Grubb, Jordan (Whitney – “Wendy”) Grubb, Danielle Grubb, and Nicholas Wall; great grandchildren, Emma and Maxwell Johnson; sister, Jeannie LaMonica; and dogs (“sweethearts”), Reggie and Rusty. His family will treasure the many memories with him, including his many hilarious “dad” jokes and big bear hugs with kisses on the cheeks. A Mass of Christian Burial will be at 1:00 p.m. on Friday, September 24, 2021 at Our Lady of the Assumption Catholic Church, 2222 Shopiere Rd., Beloit, Wisconsin. Father Michael Resop will be officiating. A visitation of remembrance will be from 4 to 8 p.m. on Thursday, September 23, 2021 in the Daley Murphy Wisch & Associates Funeral Home and Crematorium, 2355 Cranston Rd., Beloit, Wisconsin. In lieu of flowers, Gardner would appreciate donations be sent to Vets Roll in his name.

Gardner P. Grubb, 83, of Roscoe, Illinois, passed away on Thursday, September 16, 2021, surrounded by his children and grandchildren. He was born on July 21, 1938 in Chicago, IL, the son of Gardner Sr. and Sally Grubb. Gardner was a veteran... View Obituary & Service Information

The family of Gardner Grubb created this Life Tributes page to make it easy to share your memories.

Gardner P. Grubb, 83, of Roscoe, Illinois, passed away on Thursday,...

Send flowers to the Grubb family.