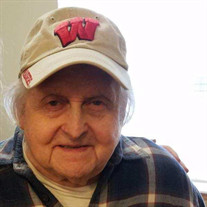 Gerald (Jerry) E. Ginner (84) of Janesville, WI, slipped away peacefully on May 27, 2021, from complications of Alzheimer’s with family by his side. Jerry was born on August 20, 1936, at Madison General Hospital in Madison, WI, to Robert & Helen (Fenton) Ginner. Jerry was a 1954 graduate of Brooklyn High School and gave the Salutatory Address. He played baseball, basketball and lettered in football. Jerry married Barbara Mae Schauer in 1957. She predeceased him on July 6, 2018. Jerry worked for several body shops mastering his craft because of his love of cars. He then became one of the local milkmen for the Janesville area working first for Arbuthnot Dairy and then became his own distributor with Mueller Pinehurst until he retired from the milk industry in 1986. Everybody knew his yellow and primer truck around town. He then took a job with Janesville Group Limited as a printer until he really retired. Jerry loved his dog Sammy, the Chow. He had several hobbies from making duck decoys when he was a kid to going to car shows, restoring cars, especially his ’71 Firebird. He liked auto racing, sports (Go Pack Go) and collecting 1/18th scale model cars. Survivors include his children, Cheryl Ann Lowe of MO, Randy Ginner of Beloit, WI, Terry (Jean) Ginner of Rockford, IL, Lori (L.T.) Trogdon of Springfield, MO, and Robert Oestriech; grandchildren, Tasha, Heather, Katlin, Andy, Travis, Michael, Jason, Mercedes, and Faith; nephew Dan (Vicki) Olsen; other relatives and friends. He was preceded in death by his parents, sister & brother-in-law Sandy (Richard) Olsen. There will be a visitation of remembrance on Thursday, June 3, 2021 from 5 to 8 pm at Daley Murphy Wisch & Associates Funeral Home, 2355 Cranston Road, Beloit, WI. Funeral services will be on Friday, June 4, 2021, at 10:30 am in the funeral home with Pastor Darrell Wildes will officiating. Burial will be in Mt. Hope Cemetery, Brooklyn, WI.

Gerald (Jerry) E. Ginner (84) of Janesville, WI, slipped away peacefully on May 27, 2021, from complications of Alzheimer&#8217;s with family by his side. Jerry was born on August 20, 1936, at Madison General Hospital in Madison, WI, to Robert... View Obituary & Service Information

The family of Gerald "Jerry" E. Ginner created this Life Tributes page to make it easy to share your memories.

Send flowers to the Ginner family.