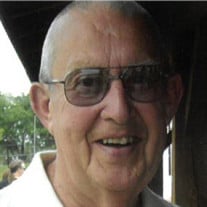 Gerald L. “Jerry” Poffenberger, 79, of Beloit, WI, passed away on Saturday, September 18, 2021 at Beloit Memorial Hospital after a lengthy illness. He was born on February 9, 1942 in Beloit, WI, the son of Wayne and Edith Poffenberger. Jerry was a 1960 graduate of North Boone High School. He married Barbara Jeanne Reynolds on August 1, 1964 at Second Congregational Church in Beloit. Jerry was employed by Beloit Corporation for 35 years as a machinist. He loved to be outside enjoying the sunshine laying on a lawn chair by the pool with his cat, Mau of 20 years, who predeceased him just one month ago. He was involved with the casino project with the bad river/ St. Croix tribes. Jerry volunteered with the Beloit Snappers. He loved to hang out at Grinnell Hall with his friends. Jerry loved to tell stories about his younger years spent at the pop house. He could fix anything and even installed a switch to self-start a Toyota Corolla in 1987. Jerry was an avid Chicago Bears fan. Survivors include his wife, Barb Poffenberger; daughters, Lori (Andy) Mauel of Beloit, WI, Ann (Darrin) Kein of Dekalb, IL, Karla (Ed) Draves of Beloit, WI; four grandchildren, Morgan (Mike) Engibous, Zach Kein and Arian, Brody Mauel, Logan Kein and Julia; great grandchildren, Henry, Charlie and baby Kyler, on the way; his five siblings, George (Beverly) Poffenberger, Karen Givens, Phyllis (Darrell) Williams, Denis (Chris) Poffenberger and Robert Poffenberger; sister-in-law and brother-in-law, Tom and Bette Ann Harvey; and many nieces, nephews and friends. Jerry was preceded in death by his father and mother, Wayne and Edith Poffenberger; father-in-law and mother-in-law, Bart and Eleanor Reynolds; brothers and sister-in-law, Curtis Poffenberger, Phil (Diane) Poffenberger, Roger Poffenberger and Ken Poffenberger; beloved cat, Mau; dogs, Puppy, Brooke, and Barney. A Funeral Service for Jerry will be held at 10:00 a.m. on Friday, September 24, 2021 in the Daley Murphy Wisch & Associates Funeral Home and Crematorium, 2355 Cranston Rd., Beloit, WI with Bernard Bray officiating. A Visitation of Remembrance will be from 8:30 a.m. until the time of service Friday in the funeral home. Inurnment will be in Luther Valley Cemetery. The family would like to give a special heartfelt thank you to Beloit Memorial Hospital for all of their devoted and loving care to Jerry and the family. Memorials in his name will be established at a later date.

The family of Gerald "Jerry" Poffenberger created this Life Tributes page to make it easy to share your memories.

Send flowers to the Poffenberger family.