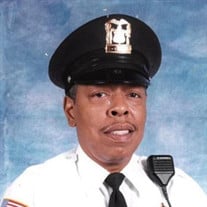 Glenn D. Howard, lovingly known as “Chief”, 70, passed away at home on Tuesday, January 12, 2021, surrounded by his wife and family. Glenn was born in Chicago, IL on January 21, 1950, to Jacqueline & Albert Howard. He was the second eldest of six children. Glenn married the love of his life, Olivia Tann, on April 7, 1993, in Beloit, WI, and together they raised three sons Wesley, Jackie, Obie, and a daughter Raashee Tann, and he enjoyed spoiling a host of grandchildren, nieces and nephews. “Papa” Glenn could be counted on for midnight shopping trips with his girls and junk food and new games for the boys. Glenn enjoyed watching movies and playing video games in his down time. His expansive DVD collection could probably hold a record in the Guinness Book of Records. Glenn loved his wife’s cooking, traveling, and summer trips to the Dells with family. Glenn was a faithful man, with a deep spirituality. He attended St. Columbanus Catholic School and graduated from Calumet High School, both in Chicago. Glenn had a life transformation in October of 1990 when God led him to the 12-Step Program. He dedicated the rest of his life to helping others fight their addictions. He was employed for 26 years at Haymarket Center in Chicago, a comprehensive treatment center for addiction, serving most recently as chief of security until his retirement in 2017. He loved this work and the mission of the organization and helping others recover from addiction. Glenn was thankful for the help he had in his recovery and lived clean and sober until his death. Glenn was a loyal friend, serving as a father figure for many men over the years. He loved being able to give this gift and telling his story to others. He also enjoyed his time working in security after retirement for Walmart in Beloit, WI. Glenn leaves to mourn his passing his loving wife, Olivia; his children Wesley (Madelyn), Jackie (Javelin), Obie (Angelica), and Raashee; grandchildren, Nathaniel, Jackie, Mickyla, Mickey Jr, Daniel Glenn, Reeasha, Passion, Jashiya, Jordan, Koah, Arielle, Amber, Jason, Caden, Kennedy, Obie Jr., and Royal; siblings Kenneth (Aleta), Ruelyn, Jan, and Corky, and many nieces, nephews, and cousins, sponsees and friends. Glenn was preceded in death by his parents, his brother Carl, and a host of aunts and uncles, with a close and special relationship with Uncle Henry Thompson and Aunts Linda Thompson and Rubye Jones. A memorial service in celebration of Glenn’s life will be announced at a later date. A special thank you to the staff at Beloit Regional Hospice, Beloit Memorial Hospital, Autumn Lake, Dr. Tecarro, Dr. Penninghouse, Dr. Sage, Dr. Chughtai, and Daley-Murphy-Wisch Funeral Home.

The family of Glenn D. Howard created this Life Tributes page to make it easy to share your memories.

Send flowers to the Howard family.