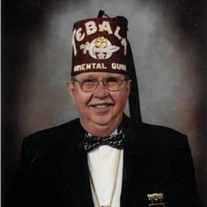 Glenn Arnet Klebsdel, 95, of South Beloit, IL. went through the Gates of Eternal Life to be with his God on Friday, April 23, 2021 in his home. He was born on July 8, 1925, in Maywood, IL., the son of William M. and Emma A. Klebsdel. Glenn was a graduate of Beloit High School. After high school he entered the armed forces serving with the United States Army during the Korean Conflict. When returning to the states, he was a ROTC instructor at the Northwestern Military and Naval Academy. Later he was transferred to the Research and Development Section in Fort Riley, KS., where he served as Sergeant Major. Glenn was united in marriage with Dorothy Sonnenson on March 10, 1973. She predeceased him on May 7, 2006. Glenn was the City Clerk of South Beloit from 1968-1978. Dorothy and Glenn were co-owners of Club 26, Ft. Atkinson for ten years. He was a former member of the Beloit Elks Lodge holding an officer’s position, South Beloit Businessman’s Association, V.F.W, Post 2306, Loyal Order of the Moose Lodge #191 and the South Beloit Lions Club. He was a member of the Roscoe Lodge #75, A.F. & A.M., a member of the High Priest Council, Royal Arch Masons, served two terms as an Excellent High Priest, Chapter #24, Rockford, IL. A Dias Officer of the Cryptic Council of Masons, Council #30, Rockford, IL. He served two terms as the Illustrious Master, two terms as Eminent Commander of the Knights Templar, Crusader Commandery #17, Rockford, IL., Scottish Rite Bodies, Freeport Consistory, Tebala Shrine, Rockford, IL. He was the Rabin of the Shrine Hillbilly Clan #70, Commander of the Tebala Shrine Legion of Honor, President of the Loves Park, IL. Shrine Club and a member of Order of Eastern Star #641 Roscoe, IL. Survivors include his many friends. Glenn was predeceased by his parents; brother, Harold and sister, June Benson. A masonic service for Glenn will be held at 2:00 p.m. on Monday, May 3, 2021 in the Daley Murphy Wisch & Associates Funeral Home and Crematorium, 2355 Cranston Rd., Beloit, WI. followed by a memorial service with Reverend Gene Van Galder officiating. Inurnment will be in Shopiere Cemetery. Visitation will be from 1:00 pm until time of service, Monday in the funeral home. Social distancing and face mask are required.

The family of Glenn A. Klebsdel created this Life Tributes page to make it easy to share your memories.

Glenn Arnet Klebsdel, 95, of South Beloit, IL. went through the...

Send flowers to the Klebsdel family.