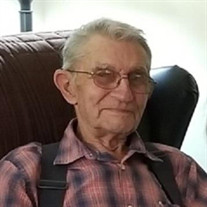 Harry Allison Sieren of Beloit, Wisconsin, loving husband, father, grandfather, and man who could fix anything, passed away surrounded by his loving family, on March 12, 2021. Harry was born on March 18, 1935 in Woodstock, IL. to father Harry John Sieren and mother Pansy Fern (Helm) Sieren. Growing up on a farm, Harry learned the value of working hard (and playing hard) at an early age. When he graduated high school, he served a machinist apprenticeship for Landis Tool Company in Waynesboro Pennsylvania, where he met the love of his life, Linda Wiles. They were married in Hagerstown, Maryland on March 25, 1961. Upon moving back to Wisconsin, Harry held many jobs until owning a wrecker service, then a fencing/landscaping business, teaching many young men valuable skills that would carry them through life. He transitioned to real estate where he helped families find the home of their dreams. After real estate, he worked for Kandu Industries/Vocational Industries where he eventually became the maintenance manager of three rest areas on I-90 in Rock County. He became the jack of all trades, problem solving any issue that came up. In 2011 he retired, but soon began repairing lawnmowers and snowblowers for family and friends. Through word of mouth, this hobby turned into a thriving business. Over the past 10 years he and his partner Dan have repaired hundreds of lawnmowers and snowblowers. He loved building relationships with his customers and took time to learn about their lives. Harry found joy in the simple things, whether it was mowing the lawn, plowing snow, eating blueberry muffins freshly baked with love by his wife, reading western novels, watching the Wisconsin Badgers, or especially, spending time visiting and laughing with his family. He taught us all the importance of waking up each day with a positive attitude that he lived by until the day he died. He is survived by his wife, Linda; children, Kimberly (Terrence) Cassidy of Milwaukee, Amy (Scott) Obremski of Waupaca and Harry Jason (Tatiana) Sieren of Beloit; grandchildren, Matthew Cassidy, Rachel Cassidy, Anastasia Sieren, Charlotte Sieren and Emmeline Sieren; siblings, Donna (Gale) Hemmerling of Beloit, Gail (Lydia) Sieren of Oregon, and Glenn (Marilyn) Sieren of Beloit; along with many nieces and nephews. He was preceded in death by his parents; siblings, Gabe Hermanson and Dorothy Peterie; and grandchild, Harry Chad Sieren. We would like to thank Beloit Regional Hospice for their support over the last six months. They provided care and compassion especially during the last couple of weeks. A private family service will be held. A public celebration of Harry’s life will be held at a later time. Daley Murphy Wisch & Associates Funeral Home and Crematorium, 2355 Cranston Rd., Beloit, WI. assisted the family with arrangements. In lieu of flowers, contributions can be made to Beloit Regional Hospice or Blackhawk Technical College Foundation to support students pursuing repair certifications.

Harry Allison Sieren of Beloit, Wisconsin, loving husband, father, grandfather, and man who could fix anything, passed away surrounded by his loving family, on March 12, 2021. Harry was born on March 18, 1935 in Woodstock, IL. to father Harry... View Obituary & Service Information

The family of Harry A. Sieren created this Life Tributes page to make it easy to share your memories.

Send flowers to the Sieren family.