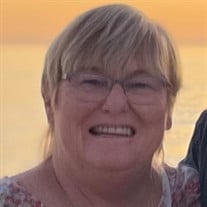 Jacqueline “Jacki” Younkin, 67, of Durand, IL, passed away on Monday, November 22, 2021 at Agrace Center for Hospice and Palliative Care in Janesville, WI, after a two-and-a-half-year courageous battle with ovarian cancer. She was born on October 20, 1954 in Beloit, WI, the daughter of Kenneth and Carol (Jackson) Tuttle. Jacki was a 1972 graduate of Riverview High School, Sarasota, FL. She married Kirby Younkin on May 1, 1975 in Sarasota, FL and in 1976 they moved to Beloit, WI. Jacki was employed by First National Bank as a Loan Processor until she retired on March 1, 2019. She was known as a personal accountant for many people. She was always thinking of others and was loved by everyone. Jacki enjoyed golfing and bowling, she was on several leagues and attended many state tournaments. She was an avid Green Bay Packers and Wisconsin Badgers fan. Jacki enjoyed her mother daughter weekends and spending time at her winter home in North Port, FL, where she enjoyed going on walks. She loved traveling to the Badlands, Door County, Lambeau Field, Cape Canaveral, Mt. Rushmore, and most recently an Alaskan Cruise. Jacki enjoyed camping at Yogi Bear in Ft. Atkinson. Jacki knew many people all over the world, making lots of friends while traveling. She was a true friend and caregiver and will be missed by all. Survivors include her husband of 46 years, Kirby Younkin of Durand, IL; children, Kirby Lloyd Younkin of Beloit, WI and Erica (Jason) Lingen of Durand, IL; grandchildren, Oliver Lingen, Michaela Avila, Maricela (Laker) Whitaker, Mauricio and Manuel Ramos; two great granddaughters, Aureliana and Malayah; sister, Luanne (Leslie) Monroe of South Beloit, IL; mother-in-law, June Kinney of Sarasota, FL; brother-in-law, Lloyd “Skip” (Jan) Younkin of Sarasota, FL; special nieces and nephews, Stacy (Brian) Christianson, Todd (Jenny) Monroe, Amanda (Louis) Schnack and Kena (Kenneth) Gibson; many other nieces and nephews; cousins, including, Pam (Danny) Haynes; great niece and great nephews; great-great niece; other relatives and many close friends. Jacki was predeceased by her parents; grandson, Bryce Lingen; and brother, Kenneth J. “Butch” Tuttle. A Celebration of Life for Jacki will be from 5 to 8 p.m. on Friday, December 10, 2021 at the South Beloit Businessman’s Hall, 525 Washington St., South Beloit, IL. Daley Murphy Wisch & Associates Funeral Home and Crematorium, 2355 Cranston Rd., Beloit, WI assisted the family with arrangements. Memorials in her name may be given to the UW Carbone Cancer Center.

Jacqueline &#8220;Jacki&#8221; Younkin, 67, of Durand, IL, passed away on Monday, November 22, 2021 at Agrace Center for Hospice and Palliative Care in Janesville, WI, after a two-and-a-half-year courageous battle with ovarian cancer. She was... View Obituary & Service Information

The family of Jacqueline Younkin created this Life Tributes page to make it easy to share your memories.

Send flowers to the Younkin family.