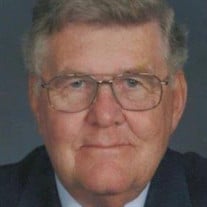 James Michael “Jim” McIntyre, passed away peacefully on December 27, 2021 at the age of 85 at his home in Roscoe, IL. Jim was born April 28, 1936 in Eaton, OH to Emory and Lucille McIntyre. He graduated from Chaminade High School and attended The Ohio State University. In 1956, Jim joined the Air Force where he proudly served as part of the Strategic Air Command division. In 1957, while home on leave, he met the love of his life, Nancy, and they were married in August of that year. After leaving the Air Force, Jim embarked on a 36-year career with Parker Hannifin in Eaton. In 1972 Jim accepted a transfer to a new Parker plant in Grantsburg, WI and moved the family north. Jim and Nancy remained in Grantsburg for 13 years, making many lasting friendships. In 1985, Jim accepted another transfer and was on the move again to Mooresville, NC where he worked until retirement. Jim had a lifelong love of the outdoors and camping. Over the years, Jim and Nancy enjoyed travelling around the U.S. and in retirement, finally made the trip to Ireland. These travels often brought them to south Texas. In 1998, after Jim’s retirement from Parker, they made the move to Edinburg, TX where they stayed until the fall of 2018 when they made their last move back north to be closer to their children. Jim was preceded in death by his parents, Emory and Lucille. He is survived by his wife of 64 years, Nancy; sons Chris, Mike (Mary Jo) and Tim (Leta); daughters, Beth (Mark) Westrom and Sue (Mike) Forester; grandchildren, Travis (Aimee) McIntyre, Sean (Angie) McIntyre, Zachary (Anne) McIntyre, Ethan McIntyre, Kevin (Brooke) Westrom, Ashley McIntyre, Bryan Westrom and Meghan McIntyre; great grandchildren, Isabella, Ruby, Aidan and Zoey; sister, Ann (Jerome) Mohr; many nieces and nephews; cousins and friends. A Funeral Service for Jim will be held at 10:30 a.m. on Friday, January 28, 2022 at St. Thomas Catholic Church, 824 E. Grand Ave., Beloit, WI. A Visitation of Remembrance will be held from 9:30 a.m. until the time of service Friday in the church. Inurnment will be held at a later date. Daley Murphy Wisch & Associates Funeral Home and Crematorium, 2355 Cranston Rd., Beloit, WI, assisted the family with arrangements.

The family of James McIntyre created this Life Tributes page to make it easy to share your memories.