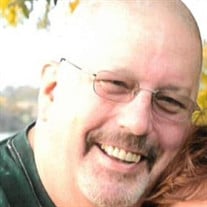 James A. “Jim” “Taz” “Jimbo” Thill, 64, of Janesville, WI, passed away on Wednesday, February 2, 2022 at St. Mary’s Hospital in Madison. He was born on October 5, 1957 in Waupun, WI, the son of Ralph and Jo Ann (Urban) Thill. Jim grew up in Campbellsport, WI before moving to Beloit. He was a 1975 Beloit Memorial High School graduate. Jim married Darla Zane on May 16, 1992. Jim was formerly employed by Pepsi, Beloit Pipeline, Michels Pipeline in Brownsville, WI, and Alliant Energy until his retirement in 2018. He enjoyed going up north, hunting and fishing. Jim liked bowling, gambling, lottery scratch offs, playing horse shoes, trivial pursuit and a cold beer. Jim, Darla and her parents went on a trip to the Daytona 500 in 2009 and to Graceland for Terry. Jim was extremely proud of the Black Bear he shot in Winter, WI. He also enjoyed watching the Milwaukee Brewers, Green Bay Packers and NASCAR just because that’s what Darla liked. Jim was also a life member of the Beloit Moose Lodge 191. He held many offices including Governor, and was proud to have been a part of their Ritual team for many years. Survivors include his wife, Darla; children, Stephanie (Morgan) Railton of Beloit, WI and Jacob (Nichole) Thill of Clinton, WI; grandchildren, Logan, Gage and Ella; brother, Steve (Dorothy) Thill of Pensacola, FL; sister, Susan (Russ) Burns of Beloit, WI; in-laws, Jack and Theresa Zane of Beloit, WI; brothers-in-law, Jack (Sandy) Zane of Janesville, WI and Jared (Heidi) Zane of Beloit, WI; sister-in-law, Danielle (Mike) Place of Beloit, WI; a special cousin, Gale (Mark) Behling of New Berlin, WI; several nieces and nephews; great nieces and nephews; many cousins, aunts and uncles; other relatives and friends. He was predeceased by his parents; step-father, Harold “Wes” Westerbeck; his boys, Gunner and Rigley; several aunts, uncles and cousins. A Celebration of Life for Jim will be held on Saturday, April 30, 2022 from 1:00 p.m. to 4:00 p.m. at the Beloit Moose Lodge, 1806 Gale Dr., Beloit, WI, please use the West Side entrance. Memorials may be made to the family.

The family of James A. Thill created this Life Tributes page to make it easy to share your memories.

Send flowers to the Thill family.