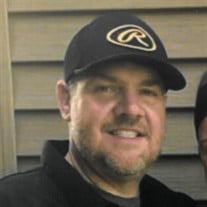 Jason Denby Walker, 47, of Beloit, WI, passed away unexpectedly Thursday, March 18, 2021 at Beloit Memorial Hospital due to complications from open heart surgery. He was born on May 29, 1973 in Beloit, WI, the son of Dennis and George Ann (Nelson) Walker. Jason was a 1991 graduate of Beloit Catholic High School. After high school Jason moved to Madison, WI, where he worked for BW3. He then moved to Milwaukee, WI, where he became the general manager. Jason later moved back to Beloit where he met his beautiful wife Amy. He worked numerous jobs before starting his career at AT&T of Illinois (20 years), and had his daughter, Jacey “Goose”. Jason was an active member of the Star Zenith Boat Club in Beloit, WI. He loved his Cubs, Packers, and Badgers, but most of all he loved watching his daughter play softball. Jason enjoyed being in the kitchen making gourmet meals and smoking or grilling meat for his family and friends. He loved life up north whether it was fishing, hunting, being on the lake or in the woods at the Harris farm. Jason was known for his love of 80’s rock music (RATT), pizza, and Bud Light. Survivors include his wife, Amy Walker; daughter, Jacey Walker; father, Dennis Walker; brother, Brian (Nicole Perkins) Walker; mother-in-law, Marjorie Harris; nephews and nieces, Teagan, Shane, Michael (Courtney), Morgan (Josh), Callissa (Jon), Jordan (Kim), Collin, Kaden, MacKenzie, ReyAnn, Sydnee, and Cheyenne; great nieces and nephews, Ashton, Alaina, William, Charlotte, Blake, and two more on the way; many special aunts, uncles, cousins, and close friends. He was predeceased by his mother, George Ann Walker; brother, Christopher Walker; paternal grandparents, Darwin and Wanda Walker; maternal grandparents, George and Mary Nelson; father-in-law, Paul Harris; GG, Clara Nottestad; and brother-in-law, Shawn Harris. Jason will be deeply missed by his family and his many lifelong friends. We love you! “One bite everybody knows the rules”. A Funeral Service for Jason will be at 11:00 a.m. on Thursday, March 25, 2021 in the Daley Murphy Wisch & Associates Funeral Home and Crematorium, 2355 Cranston Rd., Beloit, WI. A Visitation of Remembrance will be from 5 to 7 p.m. on Wednesday, March 24, 2021 in the funeral home. There will also be a visitation from 10 a.m. until the time of service Thursday in the funeral home. An interment will be held at 10:30 a.m. on Friday, March 26, 2021 in the Mt. Thabor Cemetery, 2138 Shopiere Rd., Beloit, WI. In lieu of flowers, please do as Walkdog would do and enjoy a meal or beer with your family and friends. Memorial donations may be made to the family.

Jason Denby Walker, 47, of Beloit, WI, passed away unexpectedly Thursday, March 18, 2021 at Beloit Memorial Hospital due to complications from open heart surgery. He was born on May 29, 1973 in Beloit, WI, the son of Dennis and George Ann (Nelson)... View Obituary & Service Information

The family of Jason D. Walker created this Life Tributes page to make it easy to share your memories.

Send flowers to the Walker family.