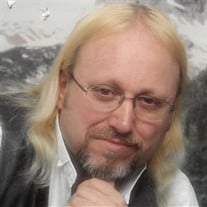 Jerry Clair Prindle, 67, of Beloit, WI, passed away on Saturday, March 26, 2022 in his home. He was born on June 21, 1954 in Beloit, WI, the son of Howard Jr. and Laura (Schoff) Prindle. Jerry was a 1972 Beloit Memorial High School graduate. He was the youngest recipient of an Art Degree from the Art Institute of America. Jerry was formerly married to Penni Secore in 1975 and he later married Susan Markley in 1982. Jerry was formerly employed by Adams Korn Kurls and Beloit Sign Company. He was employed by Frito Lay from 1972 until his retirement. Jerry was the manager of the Corral Restaurant and owned many of his own businesses, including Prindle’s Personal Touch Artist and J&S Country Western Arts and Crafts. He was the promoter and producer for several blue’s artists to include, Johnny Dean and Eddie King and John Ford who was a biker folk music artist. Jerry was very artistic and had many artistic endeavors around the Beloit community to include the Murial at Crossroads Bar & Grill and many sign boards for Beloit Sign Company. Survivors include his son, Alexander John “AJ” (Cat) Prindle of North Carolina; daughter, Sherry (Curtis Nichols) Johnson of Beloit, WI; grandchildren, Dalton Johnson, Patricia Nichols, Ruby, Max and Violet Prindle; brother, Roger Howard Prindle; mothers of his children, Penni Secore and Susan Markley. Jerry was predeceased by his parents. A Graveside Service for Jerry will be held at 12:00 p.m. on Tuesday, April 5, 2022 in the Floral Lawn Cemetery, 835 Dearborn Ave., South Beloit, IL. A Celebration of Life will be held from 3:00 p.m. until 5:00 p.m. on Tuesday, April 5, 2022 at the VFW Post #2306 in the upper hall.

The family of Jerry C. Prindle created this Life Tributes page to make it easy to share your memories.

Jerry Clair Prindle, 67, of Beloit, WI, passed away on Saturday,...

Send flowers to the Prindle family.