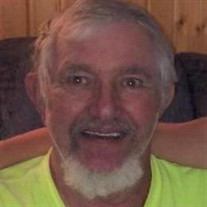 John E. Brickson, 73, of Beloit, WI, died on Thursday, April 8, 2021 in his home. He was born on March 14, 1948 in La Crosse, WI, the son of Logan and Marie (Rudolph) Brickson. John was a 1967 graduate of Central High School, La Crosse, WI. He was a veteran serving with the U.S. Army from 1968 until 1969. John married Dawn Straight and had four boys. He later married Linda Sorenson on July 31, 1999. John was employed by the Beloit Corporation for over 30 years. He was a member of the Newark Gun Club and could be found at the Carom Room shooting pool. John enjoyed playing cards, gambling, hunting, fishing, driving his golf cart around, and spending time up north at the Eagle’s Nest Resort. Most of all he loved being with his family. Survivors include his wife, Linda Brickson; children, Tim (Nicki) Brickson, Mikal (Mary) Brickson, Scott Brickson, and Patrick (Shannon) Brickson; step-children, Steve (Fran) Sorenson, Scott (Katalina) Sorenson, Tina (Kevin) Munson, Peggy (Tom) Lincoln, and Jason (Melissa) Sorenson; 23 grandchildren and 8 great grandchildren; sisters, Helen Fricke and Mary Gokey; many nieces and nephews. He was predeceased by his parents; granddaughter, Stephanie Munson; sister, Ruth Gladden; brothers-in-law, Danny and Randy Straight; and sister-in-law, Nancy Vierling. A Memorial Time of Remembrance will be at 3:00 p.m. on Saturday, April 17, 2021 in the Daley Murphy Wisch & Associates Funeral Home and Crematorium, 2355 Cranston Rd., Beloit, WI, with Military Honors accorded by the V.F.W. Mead Allen Post #2306. A visitation of remembrance will be from 1:00 p.m. until the time of service on Saturday in the funeral home. Social distancing and face masks are required.

The family of John E. Brickson created this Life Tributes page to make it easy to share your memories.

Send flowers to the Brickson family.