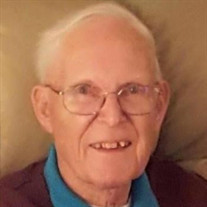 John “Jack” R. Walsh, 91, of Beloit, WI, passed away peacefully on Wednesday, June 16, 2021 in the Suites at Beloit surrounded by his family. He was born on December 17, 1929 in Beloit, WI, the son of Irvin and Alice (Mosley) Walsh. Jack was a 1948 graduate of St. Thomas High School, Rockford, IL and a 1957 graduate of Loras College, Dubuque, IA. He was a veteran serving with the U.S. Army from 1951 until 1953 during the Korean Conflict. Jack married Kathryn Hughes on September 1, 1956 in St. Thomas Catholic Church, Beloit. She predeceased him on December 4, 1997. He later married Eileen (Tuck) Burlingame on May 6, 2000 in Our Lady of the Assumption Catholic Church, Beloit. She predeceased him on May 29, 2015. Jack was employed by Taylor Freezer in Rockton, IL for 32 years, retiring in 1991. He was a member of St. Thomas Catholic Church and the Beloit Evening Lions Club. Jack volunteered for Beloit Meals on Wheels, Beloit Regional Hospice, and was a 1941 Beloit Marble Champion. He enjoyed theater, playing cards, golf, traveling, and was a sports enthusiast. Jack was a proud veteran and was honored in 2014 to take part with his best friend, Ken Thompson in the Vets Roll Trip to Washington. Survivors include his sons, Timothy Walsh of Farmington, MO, Kevin (Vicki) Walsh, and Brian Walsh both of Beloit; step daughters, Susan Anderson, Brenda (Dennis) Allen, Deb (Matt) Schindler, and Jodi (Tim) Sanders all of Beloit; 15 grandchildren and seven great grandchildren; several nieces. He was predeceased by his parents; stepfather, John Roth; son, Mark Walsh; brothers, Don and Bill Walsh; father-in-law and mother-in-law, Kenneth and Jewel Tuck; brother-in-law, Tom Bushaw; sister-in-law, Maree Walsh; and special friend, Richard Brown. A Funeral Mass of Christian Burial for Jack will be at 10:30 a.m. on Monday, June 21, 2021 in the St. Thomas Catholic Church, 822 E. Grand Ave., Beloit, WI. Burial will be in Mt. Thabor Cemetery with Military honors accorded by the V.F.W. Mead Allen Post #2306. Visitation of remembrance will be from 4 to 6 p.m. on Sunday in the Daley Murphy Wisch & Associates Funeral Home and Crematorium, 2355 Cranston Rd., Beloit, WI, with a scripture service held at 3:45 p.m. Memorials may be given in his name to Heartland Hospice, Beloit Evening Lions Club, the Beloit Meals on Wheels, or Vets Roll.

The family of John "Jack" R. Walsh created this Life Tributes page to make it easy to share your memories.

Send flowers to the Walsh family.