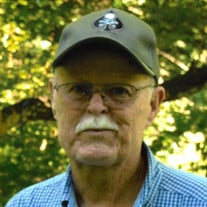 John Dan McLeod, 81, of Beloit, WI, died on Wednesday, September 15, 2021 in the William S. Middleton Veteran’s Hospital, Madison, WI. He was born on January 8, 1940 in Vicksburg, MS, the son of Cliett and Drucille (Love) McLeod. John was a veteran serving with the U.S. Navy during Vietnam. He married Judith Van Meter on December 20, 1962 in the Church by the Side of the Road, Rockton, IL. She predeceased him on November 27, 2019. John’s employment included General Motors and Wisconsin Power & Light, retiring in 1995. He loved to play softball in his younger years and coached his sons when they played with the Beloit Baseball Association Pony League. John was an avid golfer, playing in several leagues. Survivors include his sons, Michael (Kathi Saunders) McLeod and James (Mary) McLeod; brother, Nathaniel “Sonny” (Carol Anne) McLeod; and sister, Sandra (Jack) Causey. He was predeceased by his parents. A Funeral Service for John will be at 11:00 a.m. on Wednesday, September 22, 2021 in the Daley Murphy Wisch & Associates Funeral Home and Crematorium, 2355 Cranston Rd., Beloit, WI, with Chaplain Mark Maxted officiating. Burial will be in East Lawn Cemetery. Visitation of remembrance will be from 9:30 a.m. until the time of service Wednesday in the funeral home.

The family of John D. McLeod created this Life Tributes page to make it easy to share your memories.

Send flowers to the McLeod family.