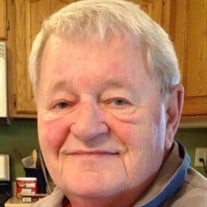 John “Mike” M. Jones, 78, of Beloit, WI, died Sunday, January 3, 2021 in his home. He was born October 17, 1942 in Beloit, WI, the son of John H. and Marion (Hagen) Jones. Mike was a veteran of the U.S. Army. He married Sharon Steinmetz on June 19, 1965 in Beloit, WI. Mike was employed by the Rock County Sheriff’s Department and retired after 29 years of service. As a deputy for Rock County Mike was involved in many things, including: being a part of the scuba dive team, excelling in marksmanship, and flying inmates to and from different locations. Mike loved adventure and was never afraid to try something new. He had a great love of air and space travel. From flying small planes to learning to fly ultralights and hang gliders. Later in life he continued his passion for flying and built and flew model airplanes and helicopters. He then combined his passion for flying with his passion for cooking at, “Turtle International Airport”, where he both participated and cooked at their events. Traveling or camping, whether alone or surrounded by family and friends, brought him great joy. Mike’s more recent everyday trips included: scooter rides around the block with his dog, Toby, talking to neighbors, and befriending construction workers. Survivors include his wife, Sharon Jones of Beloit, WI; children, Brenda (Ken) Marquardt, John D. (Penny) Jones and Heidi (Rod) Mikkelson all of Beloit, WI; grandchildren, Amelia (Ron) Campbell, Miranda (Dustion) Roeling, Gabrielle Marquardt, Morgan Jones, Tessa (Jamey) Fell, Olivia Mikkelson and Keegan Marquardt; four great grandchildren; and brother, Tim Urbonya. He was predeceased by his parents and two sisters, Toby Christofferson and Barbara Stibbe. Memorial Visitation for Mike will be from 10:30 a.m. until 12:30 p.m. Sunday, January 10, 2021 in the Daley Murphy Wisch & Associates Funeral Home and Crematorium, 2355 Cranston Road, Beloit, WI. Social distancing and face mask are required. Memorials may be given in his name to the Southern Wisconsin Humane Society.

The family of John "Mike" Jones created this Life Tributes page to make it easy to share your memories.

Send flowers to the Jones family.