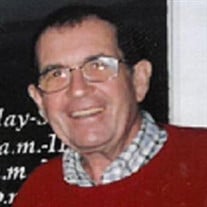 John M. Perrigo, 86, of Vero Beach, FL, formerly of Beloit, WI, passed away on Wednesday, September 8, 2021 at Sarasota Hospice House. He was born on July 18, 1935 in Chicago, IL, the son of John F. and Elizabeth (McNeil) Perrigo. John grew up in Beloit, WI and graduated from Governor Dummer Academy in So. Byfield, MA. He attended the University of Wisconsin-Madison where he graduated with a Degree in Economics. John was a member of Phi Gamma Delta. He married Joan Freytag in Williams Bay, WI on December 22, 1957. They raised four children together, Sandra, Jeffrey, Scott and Todd. Before retiring, John was the owner of Lakeside Fusee Corporation and Western Container Corporation. He was a member of the First Congregational Church and served on the Board of the First National Bank for many years. John was a philanthropist that donated to local organizations. John, Joan and his sister, Sally owned a home in Lake Geneva where they enjoyed the Lake and competitive sailing at the Lake Geneva Yacht Club. John followed his father, John F. Perrigo and father-in-law, William H. Freytag as Commodore of the Club. John and Joan retired to Vero Beach, Florida and resided in Cache Cay HOA. They were members of the Vero Beach Yacht Club and enjoyed cruising with other members on trips throughout the state. John served for a time as Board member and President of Cache Cay. He was also a licensed pilot and enjoyed flying, and attending the EAA. Survivors include his daughter, Sandra (Ted) Halbach of Madison, WI; sons, Jeffrey (Linda) Perrigo of Beloit, WI, Scott (Brigid) Perrigo of Whitefish Bay, WI, and Todd (Heidi) Perrigo of Sarasota, FL; grandchildren, Courtney and Kurt Halbach, Meghan (Vince) Landreville, Olivia and Rachel Perrigo and Fletcher and Carlye Perrigo; and cousins, Martha Child of Nashville, TN, and Laurie Corrow of Mt. Joliet, TN. A Funeral Service for John will be held at 11:00 a.m. on Friday, October 1, 2021 in the Daley Murphy Wisch & Associates Funeral Home and Crematorium, 2355 Cranston Rd., Beloit, WI with Reverend Joy Baumgartner officiating. Burial will be in East Lawn Cemetery. Visitation of Remembrance will be from 10:00 a.m. until the time of service Friday in the funeral home. John was a 25-year survivor of multiple myeloma cancer. Memorials may be made to the family, and they will make a donation to the University of Arkansas for Medical Sciences' Myeloma Center, Little Rock, AR, where he received treatment.

The family of John Perrigo created this Life Tributes page to make it easy to share your memories.

Send flowers to the Perrigo family.