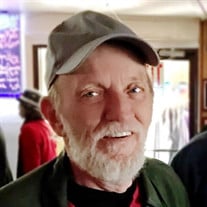 Murray, 73, born John “Stick” Robert Murray January 13, 1947, was the spirited wild child of the late Robert and Margaret (Ford) Murray of Beloit, WI. He passed away Saturday January 9, 2021 at Javon Bea Riverside Hospital from complications following a stroke. John was a talented man in many regards and did various design and engineering work for National Lock and Atwoods, worked at Rockford Drillhead designing machines, Co-owner of Stateline Auto Parts, and then eventually owning his own business, “John’s Auto Body” in Rockford, IL for many years. He finally retired as an Auto Body Technician from Bud Weiser Motors in Beloit in 2013. Our dad didn’t care that we were girls, he was going to teach us what he knew regardless. We learned many things from him, like how to hot wire a car, drive a boat, drink a beer with the guys, and more importantly, how not to crash a three-wheeler. He taught us to shoot guns, throw a punch, dodge a punch, swing a golf club- and use it on the golf course as well. He taught us how to water ski, bait a hook, hold our liquor, get a speeding ticket, and if the police officer let us off with a warning, how to make sure it turned into a ticket. We even learned how to make things work by swearing at them and when appropriate, banging them with a wrench. But most importantly, how to be a friend, to value people and not things, and how to have fun. Luckily, due to his need for speed and dare devil ways, he was granted nine lives, but even nine has been too short. His spunk and sarcasm will be greatly missed. He affected people’s lives in so many different ways, we all learned something from him, even if in certain incidences it was what not to do. He was spontaneous and innovative, he never asked for help but always gave it. He valued the little things, like Sunday dinners, a good pot roast (even if I was never able to make it right) Johnny Cash, Willie Nelson, the Beatles, and his cat Nelly. He loved a cold beer and a boat ride. He spent most of his summers on the river causing trouble, racing jet boats, or cruising in his pontoon. His neighbors were family and he was always willing to lend a hand or dive into a project with you. He was always fond of and shared many memories of; his siblings, his racing buddies, river crew, snowmobile friends, and those that took the time to visit with him in the garage or tie up to his boat and float down the river with him. So, raise a glass and tell a story or two of Murray, The Man, The Myth, The Legend-so his memory lives on. Survivors include his daughters, Tiffany Murray, Brittany Murray, DeAnne (Matt) Coburn; grandchildren, Sky, Gavin, Ariah and Zayne; siblings, Janet (Dennis) Downey, Jean Ostrowski, Joe (Kathy) Murray; along with numerous cousins, nieces, nephews, and great nieces and nephews. Predeceased by his parents; brothers, James Murray, Jerry Murray, Jeff Murray; and his sister Virginia Anderson. In honor of John, there will be a memorial visitation from 5 to 7 p.m. on Sunday January 17, 2021 in the Daley Murphy Wisch & Associates Funeral Home, 2355 Cranston Rd, Beloit, WI 53511. Social distancing and face mask are required.

The family of John R. "Stick" Murray created this Life Tributes page to make it easy to share your memories.